Pain is relative. Or maybe it’s subjective, I don’t know. It occurred to me when I got up this morning after another long, wakeful night thanks to my aching hips, that while this pain is pretty unpleasant, I’m grateful that it isn’t worse.

Because I do know worse. 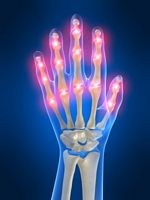 Rheumatoid arthritis keeps my hands and, sometimes, wrists in a constant state of mild to moderate pain. They’re always in flare—the joints and the tissues around them inflamed and at times swollen. It’s completely endurable, and slowly, I’m learning to adjust the way I use my hands to compensate for the pain and disability as I go about trying to live my life as normally as possible.

For the last several weeks, my hips have also been a problem, though that pain is more transitory. Some of it is caused by rheuma—indentified by pain in the groin area of the hipbones—but that occurs only in the right hip, and it comes

and goes without warning or reason. The other hip pain—which is on the outside of my hips over the joints—is caused by bursitis. Yet that pain is also strangely transitory. During the day, I feel it as an odd, twingy “looseness” in the joints along with an occasional dull ache. But at night, the bursitis pain becomes constant, the ache becoming deeper and more frustrating as the night passes and I wake up, groaning, to turn from my right side to my left (and vice versa), then to my back, again and again in a mostly futile effort to ease it.

I’ve decided to take the good advice I’ve been offered by so many of you. Tomorrow morning I’m calling my rheumatologist to ask for corticosteroid injections in the hope of easing the bursitis pain in my hips, which is worsening instead of going away like I’d hoped. I’m still a bit apprehensive about it, but I realize it’s a childish fear. The shots might hurt for a moment, but from what I’ve been told, they’ll probably stop the bursitis pain for a while. I’ll just put my big girl panties on and do it.

The reason I call this current pain relative, though, is that I’ve lived through so much worse in the past. In the late 80s and through half of the 90s, I suffered with terrible flares that often disabled me. I can remember climbing the five flights of stairs to my flat in Germany one riser at a time, clutching the banister and using it to pull myself up, pausing at the landings to build up courage for the next climb, my foot or knee or hip so painful that even the slightest movement or pressure was enough to bring tears to my eyes. I remember the many times I stood at the back of a long line at the commissary after work, waiting to get to the checkout counter with my cart of groceries, putting my weight on my good foot, the pain so huge, so overwhelming I wanted to scream. But I didn’t. I just sucked it up and tried to distract myself by thinking about the deep, hot bath I’d soak in and the lovely narcotic painkiller I’d take as soon as I got home.

I remember a night when both hands were so badly flared that I couldn’t get the door to my bedroom open so I could use the bathroom. I stood at the door in the dark and wept, trying to figure out how to push the door lever down and somehow pull it open when any movement or pressure on my hands meant flashing agony so intense it nauseated me. I didn’t even let myself think about how I’d manage to use the toilet. I’d deal with that when I got to it. And I did.

Somehow, I got through those mind-numbing rheuma flares. They were frequent, but I managed. I walked my dog, cussing under my breath. I carted laundry up and down those stairs (and an additional flight down to the basement) every week, quietly turning the air blue. I limped my way through hikes along with soldiers, interviewing them and taking photos during combat exercises. I skied the Alps in spite of a nasty flare in my right foot, drove my car to work in spite of intense shoulder or hand pain, and gimped to the city bus stop when driving was just too dangerous to attempt. I did it because I had to. I had a job, a family, a life I wasn’t willing to stop living.

Back then the only medications available to me were NSAIDs, plaquenil and gold salts. None of them had any effect on my rheuma, and believe me, I took them all. The only drugs that worked were narcotic analgesics. My doctor would only prescribe 10 tablets at a time, and those only if I dragged myself to his office at the military hospital to see him. He was, of course, fearful of addicting me, but I wasn’t worried about that at all. It was a price I was willing to pay in order to get relief, even if it was temporary, from the awful, disabling pain I lived with. And it frustrated and angered me that he was so stingy with them, even as I understood his caution.

The pain I cope with today is nothing like that, though there are moments when it feels like it’s moving in that direction. Still, I’m intensely grateful for the difference. I have to believe that my current cocktail of DMARDs is holding the rheuma in check; that it would likely be far worse without them. Hard to know for sure, of course, without stopping the meds. I won’t do that. I really don’t want to know.

The autumn rainstorms are here. Perhaps they’re part of the reason I’m so sore today. I’ve been pretty lucky during the last year or so, as the pain from the rheuma and the bursitis has been mostly bearable and it hasn’t really slowed me down very much. Not like it used to. But I had to ask Mr. Wren to cart wood in so I could build a fire in the stove; the prospect of doing it myself with such sore hips and hands made me cringe. I don’t like having to ask others to do things that I’d normally be able to do for myself. But once again, I’m learning.

The fire is blazing now, its cozy warmth comforting. I’m going to make a pot of hearty soup today (with help, I think) and spend the rest of the day doing all I can to rest and be comfortable as I enjoy the drumming of the rain on the roof and the moan of wind in the eaves. And I’m holding out hope for the corticosteroid shots, whenever they come. The rheuma … well, we’ll see.

Thanks for listening. I hope you’re all feeling well and enjoying the weekend.