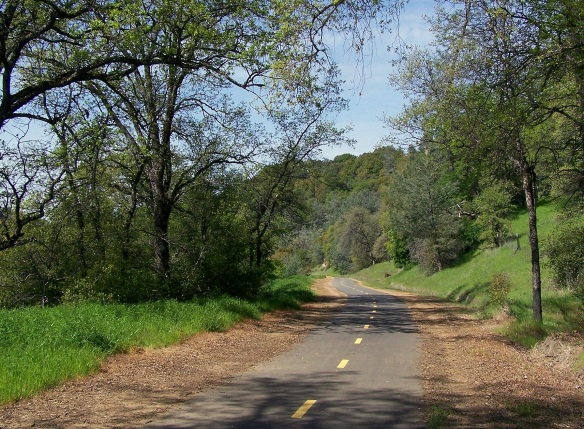 This where Finny and I went walking this morning. It's the mid-portion of the El Dorado Trail that runs from Placerville almost to Camino in the lower mountains of the Northern California Sierras.

First: To everyone who commented on the previous post, thank you. Thank you! And thank you again. I can hardly describe how touched and delighted I was this morning to find all those encouraging comments waiting for me. Believe me, reading them helped me get my rear in gear — I drank a chocolate diet/energy shake

Wildflowers along the trail.

as I drove 10 minutes down the mountain with Finny and my camera for another walk along the El Dorado Trail. I’d prefer to walk closer to home, but Camino has nothing but narrow, twisty, two-lane roads with ditches as shoulders and locals who drive them fast. They’re just not very safe for people on bikes or on foot.

But the El Dorado Trail has been built especially for walkers, bikers and horseback riders. It’s paved, has wide shoulders and is a good distance from road traffic. At this time of year, with everything blooming and the spring grasses painting everything a rich, lush green, it’s just beautiful. In a month the grasses will turn golden; by the end of summer they’ll be brown and nearly white from the heat. But for now, the world is a riot of wildflowers, sun and cool breezes.

We walked approximately four miles this morning. Too far, probably, since I’m no longer in very good walking shape, but once I was out there, Finny trotting along at

Finny looks up the trail after a short break for a drink of water (and for me to rest my legs).

the end of the leash, ears pricked and tail waving, it was hard to stop. Needless to say, by the time we turned around, I was feeling it, but as luck would have it, the return walk is a long, gentle downhill slope most of the way.

We met a good number of other walkers along the way and saw lots of pretty things. There were joggers; walkers in small gaggles and alone; a man on a recumbant bike (he passed us three times in both directions); several people on regular bikes; and to my delight, a woman in a cart being pulled by a pony. At least, I thought it was a pony, but Joanne, the 70-year-old cart driver, explained that Tonka is actually a rather large miniature horse. She was friendly and talkative, telling me how nice it is to get out on the trail and meet people. She said she’s out there almost every day and has been riding the trail with Tonka long enough that she’s met several regulars and knows them all by name. At home, she rides her Arabian showhorse and does dressage. Now there’s something to strive for!

Finny did great. He’s very well behaved on the leash, and while he does get excited

Tonka, the miniature horse, and Joanne pose for a shot.

and pull now and then, he’s learning quickly that it’s easier on us both if he walks at my pace. He seems to love getting out there, but like me, he’s not quite in shape for these longish walks yet. He’s snoozing peacefully right now, flopped on the bed.

And now, the Sierra Bushmen are here. Craig, Sean, Jason and Jack are tackling the overgrown hedgerow along the north side of the house (it’s a steep incline and I’m just not up to this sort of heavy yardwork anymore). They’re even going to weedeat the back garden for me and get the burn pile ready to light. Mr. Wren is out getting lumber for the new raised beds. Whooopeeeee!

Theheritage oak trees are in bloom.