Albinoblackbear notes in a post on her blog, Asystole is the Most Stable Rhythm (no 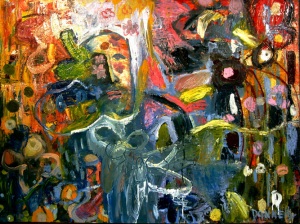 kidding?), that doctors frequently have no idea why some drugs for rheumatoid arthritis work. Or don’t work. ABB is a Canadian nurse who’s in med school in Ireland at the moment; the future doctor offers a quote from a 2009 textbook on pharmacology and is charmed by its honesty. Go take a look.

It’s no surprise to me that doctors and medical researchers are basically clueless about these drugs and how they work. They’re mystified by the disease itself, after all. They know that it’s an autoimmune disease in which a person’s antibodies attack her own tissues, but they don’t really know why. Nor do they know why it affects three times as many women as men; or why one person will be quickly disabled by it and another not. RA is an enigma.

Still, it seems that each year brings them, and us, a little closer to the answer. When I was diagnosed with RA, my doctor first put me on increased dosages of aspirin. Then he added NSAIDs. Over the years, we tried plaquenil (originally a drug used to fight malaria) and oral gold. None of them had any effect on my symptoms. I’ve since learned that methotrexate was beginning to be used frequently by 1987; that was never offered to me, though. I think perhaps my doctor, who was an internist and not well versed in treating RA, may not have known about it. Or perhaps he did, but the U.S. Army in Europe’s medical system didn’t have it in their formulary.

No matter. I discovered two summers ago, when my rheumatologist started me on it, that I couldn’t tolerate MTX. It made me feel like I was on the brink of death. After three months during which the only affect it had was to make me feel horrible, he replaced it with Arava. I’m still taking it; the only side-effect I’ve noticed is that it’s making me slowly lose my hair. As long as it doesn’t all fall out all at once, leaving me bald, I can deal with it.

And now, there are biological drugs which help some people with RA a great deal. “Some” is the operative word, however. They help some people for a while, then stop, too. Or they don’t help at all. Or they help as long as the person is taking methotrexate too. Or. Or. Or.

I get frustrated when the meds I take don’t seem to have much, if any, effect. But I’m beginning to understand that my doctors are just as frustrated as I am. And just as mystified. Oddly, that makes me feel a little better about it.