I saw Dorrie, my physical therapist, again yesterday. She’s been teaching me exercises I can use to maintain strength and flexibility in my hands, my feet, and today, my shoulders and hips. Keeping our joints flexible and the surrounding muscles strong is so important. It may not stop rheuma from attacking, but it surely can help us endure the flares more successfully, and, hopefully, reduce their pain, duration and damage over time.

(Take a look at WarmSocks’ post today – she’s got a good shoulder exercise I’m going to add to my daily routine, and she’s promising more as her own shoulder improves.)

After PT, I saw the ophthalmologist. Yes, I will soon be getting a new, slightly stronger pair of glasses – I knew that was coming, actually – but more importantly, I’m now cleared to start plaquenil. I’m hoping that a call to my rheumatologist will be all I need to do to get the slow VA pharmacy gears cranking to fill and mail the stuff soon; I don’t have another appointment with my rheumatologist until mid-May, and I’d rather not wait until then to start.

Like everyone who’s reading this, I’m hopeful that the new medication will have a positive effect. Also, like all of us, I’ve had almost countless experiences where new drugs have not seemed to have any effect at all, at least on my pain levels and frequency of flares. Methotrexate might have helped at some point, but it made me so sick I begged to get off it. I’m on sulfasalazine, Arava and diclofenac now, and while they seem to be having an effect on my sed rate, my hands are still sore nearly constantly.

So while I’m good with starting another drug, I’m also somewhat ambivalent.

You see, I did try plaquenil for about six months in the late 80s, when my rheuma 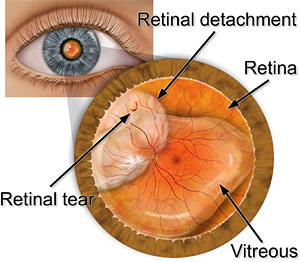 was extremely severe and frequently disabling.  (Oh, the stories I have of canes and crutches, casts and slings and splints …) It’s my understanding that today the dosage has been greatly reduced to avoid the frightening side effect of retinal “holes,” and I don’t recall, now, what the dosage was back then.

What I do know is that upon having my eyes checked six months after I started taking it in the late 80s, the U.S. Army ophthalmologist discovered a small hole in my retina that hadn’t been noted during my baseline eye exam. He was dismissive about it, saying, “I don’t think the plaquenil caused that. It would take much longer to develop that side effect. You’ve probably always had that tear.” The rheumatologist I saw that day was even more dismissive. It was as if I was wasting his time by being there.

True, my vision was not affected by the hole, but I couldn’t understand why, if I’d always had it, it hadn’t been noted upon that pre-plaquenil exam, which of course I’d had specifically because I’d be taking the drug. The idea that they’d ignore such a potentially fearful side effect sent my trust for that rheumatologist – who I’d traveled six hours by Autobahn to see at the giant U.S. Army medical center at Wiesbaden – into the toilet. When I got back to Bremerhaven, I told my internist that I would not take that drug anymore. I was terrified.

To his credit (boy, I liked this guy) he sighed but didn’t argue with me. I told him I’d like to see a local German rheumatologist, someone who might be better equipped to deal with me, and bless him, my doc gave me the nod (another reason to like him). I found one, was given a thorough examination, and put on oral gold. The U.S. Army ordered the medication for me and my care was transferred back to my internist.

I took it for a full year. While I was on it, I had to have my liver function checked with a blood test every two weeks. By the end, the veins in my elbows had collapsed and they were taking blood from the veins on the backs of my hands. And still, no effect. My RA remained just as severe, just as agonizing, just as disabling. Eventually, I stopped taking gold, too. What was the point?

My poor doc was out of options. We’d tried everything they had available. He had me take yet another type of NSAID and, when my pain was severe, filled limited prescriptions of Percocet to help me deal with it. Once, when my hip flared so badly I couldn’t walk and oral narcotics weren’t touching it, he hospitalized me for two days and put me on intravenous morphine. The flare finally eased (six days, total) and he sent me home.

During those early years, narcotic analgesics were the only medications that ever had any effect at all on my pain. I knew – he explained it clearly – that these could do nothing at all about the disease itself; they were only relieving symptoms. I didn’t care. It was the symptoms of the disease that disabled me, and I didn’t know enough about RA at the time to understand its potential for more permanent disability. I had to work. I needed relief. And I hated the NSAIDs – they all tore up my stomach – and I was not very good about taking them regularly. I was a nightmare patient, I’m afraid.

Upon our return to the U.S., I started seeing another Army rheumatologist. This one pooh-poohed my previous doc’s diagnosis of rheumatoid arthritis because, wouldn’t you know, when they tested my blood they didn’t find the rH factor. This in spite of my Bremerhaven doc having found it in my blood, earlier, and the German rheumatologist’s concurrence of his diagnosis. This new doc said I had polyarthritis and prescribed naprosyn.

Frustrated and furious, I’d had it. I stopped going to the doc for my RA. I simply endured it, taking ibuprofen and, once it went OTC, Aleve now and then. Other circumstances in my life changed as time passed, too – I was divorced and moved from Washington back to California, where my family lived. And during the five years that followed, my rheuma slowly, slowly went into remission.

I didn’t see a doctor for anything but a new seasonal allergy to grasses until 2005, when a large pannus formed on my right wrist, requiring surgical removal. Even then, my rheuma wasn’t bothering me. The pannus had formed quickly and was only mildly and rarely painful. But I was surprised to discover that even though it was in “remission,” my rheuma was still there, doing its slow, relentless damage. I only started seeing a rheumatologist again in 2008, which brings my story current.

Since then, thanks to the Internet – and all of you – I’ve learned a great deal more about RA. And so I’m going to try plaquenil again, reassured by my rheumatologist and the ophthalmologist I saw yesterday, that the chance of it damaging my vision is infinitesimal. I’ll be seeing the eye doc again in six months, when they’ll do further testing to make sure all is well. I’m better informed and much less fearful this time.

And in spite of myself, I’m hopeful. Perhaps in combination with sulfasalazine and Arava, diclofenac and the positive work I’m doing with physical therapy, more exercise and a much better diet, plaquenil will work this time.

My achy fingers are crossed.