I just checked the Weather Channel webpage for my little part of the world and discovered they’re predicting rain from today through – wait for it – 8 Feb.!

I know, I know. You all think I’m nuts. Rain? I’m excited about rain? Well, 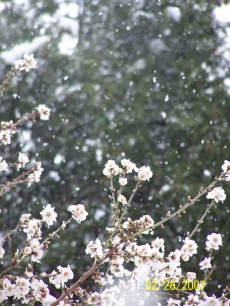 Three winters back, the almond tree in my neighbor's garden put out blossoms too early because of the strange, warmish winter. Of course, then we had some snow ...

yes, I really am. I’ve mentioned in this space before the extended drought we’ve been enduring here in California. While there have been a few significant periods of rain and snow over the last three years, “few” hardly describes the reality. I can count the number of storms on my achy fingers. Once.

The drought meant that when the rainy “season” ended, my world dried out even more and turned into a tinderbox. I’m not exaggerating. Southern and Central California had some devastating fires during the last three summers. Northern California has had a few, too, including one near Lake Tahoe, sparked by a summer lightning storm, that burned for two weeks. That’s just about 50 miles from my home.

The threat of wild fire looms every summer and fall in California, but when there’s also little snow in the high mountains, it means that everything becomes even more dry than usual. The danger, always there, heightens. Those of us who live here look ahead to summer with a certain uneasiness – and I’ve not even touched on the looming possibility of water rationing. Without these good rains – and deep snows in the high country – rationing eventually becomes vital.

It means our gardens must be allowed to dry out and die. Landscaping, flowers, vegetable gardens kaput. Farmers and ranchers are forced to let their fields and orchards go fallow. The price of food goes up all over the country; we all feel the pain.

But beyond all that, nutty as it sounds, it’s strange to live through winters that aren’t. While the changes in barometric pressure and the cold might cause me, as someone with rheumatoid arthritis, to hurt even more than I might otherwise, it’s still right and normal that it rains and snows in the wintertime. I can take it. 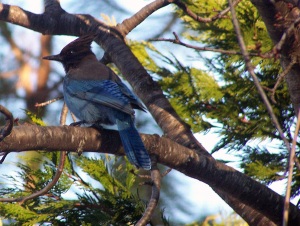 When winter never quite arrives, the birds get a bit confused. This is a Steller's jay, one of the many who live in the trees around my home and, in spring and summer, wake me with their shrieking and yelling to each other.

When it doesn’t rain and snow – and when the temperatures stick in the 60s through the deep of winter and flare up into the 80s in March, it just feels dreadfully wrong. The birds get confused. So do the plants and trees. They start leafing too early. The birds that overwinter here start nesting too early in the season, so when their first hatchlings arrive, there’s still not enough to feed them. Everything is just discombobulated. Off.

And people get cranky. Sure, when it’s cold and wet and icy and inconvenient, they’re cranky, too. But the reason is clear, and everyone knows that it’s just the way things are, it’s temporary, and we’d be in a fix without the damned wintertime. So when no rain ever drops out of the cloud cover and there’s rarely need for more than a sweater outdoors, humans also get confused. Irritable. Mostly we don’t know why, either.

I had some trouble sleeping last night. I tossed and turned. Normally, that would aggravate the you-know-what out of me, but last night, I didn’t mind as much. Why? I had my bedroom window open a crack for the fresh air. And it rained out there. I listened to it drum the roof and patter on the world outside and smelled the bright, watery scent of the rain and imagined that a few thousand feet higher up the mountain, my rain was falling as snow, white and silent, adding to the vital snowpack that, as it melts, waters the entire state. I imagined skiers and snowboarders tucked up in their hotel rooms, unable to sleep for excitement – fresh powder to ski on, come morning!

And I did, finally, drift off, listening to rainfall, glad that this winter, at least, is living up to expectations. Spring will come soon enough. So will the long, long, blistering-hot California summer. For now, though, let it rain.

2 thoughts on “An end to the drought? Achy fingers are crossed.”