… was a bowlful – about a cup – of pre-cooked quinoa, bulgur wheat and steel-cut Irish oatmeal, nuked until steamy. Mr Wren, the dear, likes to mix things up. He also has no sense of proportion, so we have a huge container full of cooked grain cereal in the fridge that needs to be eaten soon. I whittled about an eighth off the top this morning.

Normally, I eat just Irish oatmeal with a teaspoon of brown sugar/Splenda blend, a generous shake or three of Saigon cinnamo

n and a scant splash of evaporated milk. This, I’ve learned over the last year, is a delicious, filling, low fat, slow-carb breakfast. It’s wonderful on cold mornings. It sticks to the ribs and provides a nice, slow-burn energy boost. I usually make about four cups at a time and refrigerate the leftover cereal, which microwaves well. Since I don’t like it every single morning – I eat an egg with whole grain toast or toast with a slice of Tillamook sharp cheddar on the non-oatmeal days to avoid breakfast boredom burnout – four cups of oatmeal lasts me about a week.

But yesterday Mr Wren got up wanting hot cereal and, being himself, wasn’t satisfied with just oatmeal. So he got out the Dutch oven, pulled a bunch of different grains, and made himself some. Lots of it. Now I’m helping him eat it before it goes bad. Cary and Matt don’t eat hot cereal at all. They’re both grown-ups, but they prefer Lucky Charms and Cap’n Crunch.

I’m writing about this because, like a lot of people who’ve worked 9-5 most of their adult lives, I’m terrible about eating breakfast in the morning, regardless of whether it’s a nutritious one or one that just puts me into sugar overload. When I was working every day, I simply couldn’t make time for brekky before I started my 50-minute commute down the mountain at dawn. And, I was never hungry at that time of morning. I’m one of those people whose metabolism doesn’t really wake up until about three hours after the alarm goes off. That meant that at 8:30 or 9 a.m., I was suddenly, stomach-growlingly ravenous, but way too busy to stop and eat a nutritious, time-consuming breakfast.

So instead, I ate the cookies or donuts, sometimes both, that my colleagues and I frequently brought to the office as a form of tasty sustenance and bribery.

Back in my slender Germany days, we’d do things a bit differently. I mostly didn’t eat breakfast back then, either, which meant a long stretch of empty-stomachness until 11, when I’d take off like a flash for a slice of pizza and a Diet Coke in the Burger Barn. There weren’t any grocery stores or donut shops handy along the route to work in the morning, and the commissary didn’t open until 10 a.m. But about once every two weeks, my colleagues and I would pick a day and we’d all, German and Americans alike, bring Frühstück foods to the office on a day when we knew the boss would be out. Sneaky, weren’t we? 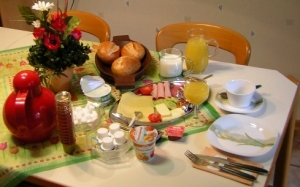 Everyone brought something – crusty, chewy, sliced bread, Brötchen ( plain German bread rolls, deliciously crispy and golden on the outside; soft, white and fluffy on the inside), several different types of cold cuts, cheeses of all varieties, some sliced, some spreadable. Jam. Pastries. Fresh fruit. Soft dairy butter. Orange juice.

And then we’d crank the poor old office coffeepot into overdrive.

Naturally, people from other offices on the U.S. Army post would stop by our office for this or that – we were Army  Public Affairs, after all. No problem – or kein Problem, as my Germany colleagues said – we invited them all to join us. It was always quite a jocular little breakfast party. If Fred (the fortuitously absent boss) knew we were using the big conference table in his office as a breakfast spread in his absence, he never said a word. But we never even considered asking him to join us, as he’d have nixed the whole thing.

You see, Fred always ate his breakfast before he came to work. It was always a big, hot breakfast, one of his “things.” His wife made it for him, and he ate it while he read the day’s Stars & Stripes. I kid you not – he made sure we knew about it. Fred was a nice but rather humorless man. He didn’t have a lot of imagination and was obviously bored to tears. I figured he was just serving out his time as a high-ranking civilian, waiting for the dayl he could retire on his comfortable government pension .

Oh, boy. There I went, off on a tangent.

OK. Back to it: my point was that while I’ve always been bad about making a healthy breakfast part of my day, I do it now. I think my health has improved because of it. Part of the reason I’ve been able to change my habit is that I’m not working outside my home these days, so I don’t have a long, crack-o-dawn commute to face. And while I’m looking for full time employment again, that’s one thing about it I don’t look forward to. I’d grown to hate that long drive at the beginning and end of each workday. I hope I can find work a lot closer to home this time.

But even so, nuking pre-cooked cereal is something I can do. It’s quick. Eating it doesn’t take long. I can even bring it to work with me and nuke it there, if there’s a microwave handy. I don’t mind eating at my desk – but these days, I want to make sure what I’m eating is good for me and isn’t going to add to my middle-aged spread.

There. I did it! I wrote a post mostly about nothing, just for the fun of writing, and got to take a nice little trip back down memory lane in the process. The only trouble is that now, I’m craving Brötchen. Guess I’ll have to google up a recipe …

Have a great day, everyone!