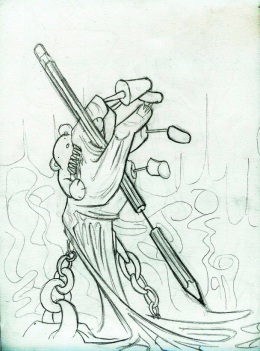 But it appears they don’t really exist. As I go about my days I don’t see other people limping along on painful feet. I don’t see people fumbling their wallets at the cash register in the grocery store, trying to slip the debit card out of it’s too-tight slot with hands and fingers stiffened and rendered breathtakingly painful by rheumatoid arthritis. I certainly never see anyone else struggle to put a jacket on because of an RA-impaired shoulder joint, or try to put food in a mouth that will open only an inch or two because the joint that hinges their lower jaw to their skull is inflamed and exquisitely painful upon movement.

But I read that there are about 2 million people in the U.S. who suffer with RA just like I do. I’m No. 1,457,932 in that exclusive group, I guess. I don’t have a card, so I can’t be a card-carrying member of the Hey-I-Have-RA Club, but according to the Wise Statistic Keepers, I belong to the club anyway.

Two million American men, women and children share this rotten disease with me. Yet I’ve only met one of them personally. That was 20 years ago in Bremerhaven, Germany, when I lived there. That man had it mainly in his spine. I was married and he was always trying to hit on me, so it was uncomfortable talking with him, but he absolutely recognized – and empathized with – my pain. He suggested alternating hot and cold packs on sore joints as a possible method for relieving my pain. It sometimes worked for him, he said.  I’ve tried to follow his compassionate advice (when I can bear the cold-pack part) ever since.

He and his wife were transferred to Italy not long after I met him. At the time, I was relieved, but I’ve often thought of him since then. I’ve wondered how he got along, whether the warmer, drier climate in Italy relieved any of his pain. I hope it did.

When I’ve admitted to others that I have rheumatoid arthritis (perhaps they asked, solicitously, why I was limping so heavily) a frequent response is “Oh! I know what you mean! I have arthritis in my knee! Isn’t it a bitch getting old?” And then they launch into their experience with their painful, creaky knee. I listen respectfully. I know osteoarthritis hurts, too. A lot.

But really, they don’t have a clue.

I wasn’t “old” when I was diagnosed with RA. I was just 31. I was a young mother whose career was just starting to take off. I’m “old” now (whatever that means), but I sure wasn’t back then. Rheumatoid arthritis isn’t a “wear and tear” disease, a natural (if annoying) part of growing older. RA is an autoimmune disease. That means the body, which is profoundly confused, attacks its own joints as if they’re foreign invaders. The body is out to destroy itself in order to save itself. Go figure.

Rheuma attacks randomly, carrying out clever ambushes so diabolical and unexpected that the Special Forces could learn stealth tactics from it. The inflammation and pain it causes can range from mild to horrific. It can cover that range during the same day, or perhaps over several days. Or a week. Or longer. The pain can hit more than one joint at a time. It can move around. Today my left knee hurts. Tonight, it might be my right shoulder, or my right ankle. Maybe both. Maybe neither. I never really know what to expect.

Try explaining that to skeptical family members and co-workers.

Sometimes RA only slows me down a little. Other times it literally disables me, giving me an unwanted glimpse into my own future. Gee, thanks, I think. I really wanted that image of myself gliding down the mall on a chunky little motorized scooter, my fat, flabby, polyester-clad arse spilling off both sides of the saddle. Yeah. Thanks so much.

Such images give me real motivation, however, to move my body as much as I can. I don’t want a future of RA-imposed weakness and obesity, a life where my only real pleasure is eating. The very idea appalls me. So in spite of the pain – or perhaps, because of it – I do what I can to prevent that particular image of the future from coming true. I mind my calories, eat healthy foods and exercise for flexibility and to maintain my independent mobility.

Yet it’s possible that RA will disable me anyway. I’d prefer not to think too hard about that.

Even though these fears and experiences, this daily pain and stiffness, these frequent schizoid sneak attacks my body wages on itself are shared by 1,999,999 other Americans and many more millions of people all over the world, I deal with my day-to-day, intimate and personal case of RA utterly alone.

How can that be? Why aren’t there local support groups for people with rheumatoid arthritis? How come there are no special exercise classes, or classes on how to cope better with the disease available? Why aren’t they part of every town’s park and recreation program, available for free or for minimal cost? Why, in the last century and during the first decade of the new millennium, hasn’t medical science found cure for this disease? Why don’t people know what it is and what it’s not? Why is it so hard for me to find others who also suffer with RA?

I don’t have answers to those questions. But I’m working on starting up those classes I just mentioned. I’m going to do it myself. I’m at a point in my life where I won’t mind getting up in front of a group, talking about and demonstrating ways to cope with RA. I want to do this. I want to help others who are struggling with this disease find some comfort and camaraderie. I want them to have hope.

The flesh-and-blood people who have RA in my community are invisible, just like me. But if I have anything to do with it, we won’t be for much longer.

Did I mention hope? Well, here’s some: A new advocacy and charitable nonprofit organization that will work for people with autoimmune arthrits is forming right now. Read on:

What if autoimmune arthritis conditions were universally understood? What if you never again had to hear, “you’re too young to have that!” or “why don’t you take some aspirin to make the pain go away?” or “but you don’t look sick!”

Wouldn’t it be nice if people understood that “I’m too tired to go” meant you were experiencing obnoxious, debilitating fatigue that is not necessarily remedied from rest or a good night’s sleep? What if there were in-depth, age-appropriate exercise programs available where you live that catered to different levels of disability and fitness preferences?  How much better could your health be if there were partnerships with retailers who would offer discounts on healthy foods or fitness facilities that would minimize monthly payments for autoimmune arthritis patients?  What if there was a global database of sufferers, family members and caregivers who had the ability to form friendships in order to deal with the daily struggles of disability?

Hopefully beginning in 2010 these wishes will start to become a reality.

The IAAM is not in competition with any existing charity.  In fact, part of the mission is to partner with existing organizations to assist with autoimmune arthritis awareness efforts.  Recently the IAAM joined forces with the Arthritis Foundation and are working on partnering with other arthritis-based charities both nationally and internationally.

Founder Tiffany Westrich is personally working with the Arthritis Foundation’s “Let’s Talk RA” program to restructure the 2010 strategic planning, in which IAAM will maintain an intricate role.

In addition to partnerships, a primary focus of the movement is to make a lot of noise, verbally and visually, by re-branding the misconceptions of the term “arthritis.”  Examples include the published web-commercial series, “A Day with RA”, showing the realities of living with an autoimmune arthritis disease; developing the first official autoimmune arthritis charity bracelets; and being featured on MyRACentral.com and WebMDtv’s “RA in the News” (Summer 2009).

If all the autoimmune arthritis sufferers around the world come together, we can make this a reality.  But first, we must raise money to finance the legal fees and start up costs to become an official nonprofit.

Today, many autoimmune arthritis blogs (just like RheumaBlog, which you’re reading now)  are joining forces to reach out to our community of sufferers for help. The IAAM is asking for $1 donations to assist with nonprofit start-up costs.  Every dollar earned will bring all of us who cope with autoimmune arthritis one step closer to being understood.

To view a complete list of start-up costs and to send your $1 donation, please visit www.BuckleMeUpMovement.com/donate.

Note: This piece has been cross-posted in my other blog, Blue Wren.

10 thoughts on “Buckle Me Up: No more invisible RA”