Just thought I’d stop by and tell you how my last Humira injection went.

If you read my last post, you’ll know that self-injecting this medicine has been fraught with jitters for me. It hasn’t mattered that I know the shot won’t hurt as much as my imagination is sure it will. It hasn’t mattered that I know the stuff may send my rheuma-dragon into a stupor and, perhaps, put an end to at least some of the neverending pain that claims so much space in my consciousness each day.

Nope. Doing this twice-monthly jab has simply been crap.

Many, many nice people, fellow-rheuma-travelers all, responded to my post. They commented here, on RheumaBlog, and at RheumatoidArthritis.net, where the post was published in full. The vast majority commented on RA.net’s Facebook page.

I just want to say thank you, right now, to everyone who commented, for being so incredibly supportive. I didn’t really think that I was alone in hating to jab myself, but I had no real idea just how many people who take subcutaneous biologic DMARDs have almost exactly the same fears that I do, and that they face and overcome them every single time they inject, too. I realize, now, that I’m an unwitting member of a huge secret society. It’s called the I HATE JABS Society. 😉

Many of those who commented suggested I switch injection sites from my upper thighs to my abdomen. I chose to inject into my thighs, originally, because it seemed to me that if it was going to hurt, it would probably hurt less there. The idea of sicking a needle into my belly gave me the heebie-jeebies. 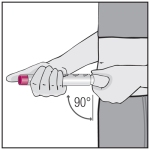 But so many people said it hurt less in the abdomen. A lot less. So many people, I reasoned, couldn’t all be wrong. So when I injected the other night, I did it in my tummy.

No pain. No nothing!

So, I’m pleased to say that I’ve no longer any reason to dread these injections. I am so glad–and so incredibly grateful to everyone who commented. Let me give the advice, now: If you inject DMARDs, seriously consider injecting in your abdomen, even if the idea makes you shudder.  It’s so much better!

Now, if only my super-charged immune system will slack off a bit and let the Humira do its job. That would be the real triumph. Fingers crossed.

35 thoughts on “Shot in the Belly”