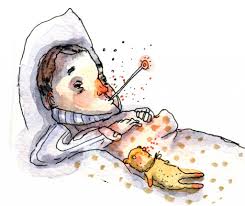 Here’s the scoop. Scientists weren’t able to identify this season’s most virulent strain until September, when it was too late to include it in the vaccine. So even if you’ve already had a flu shot to protect yourself, you can catch this flu.

Still, the vaccine does protect against several of the other strains of influenza floating around out there, so there’s that.

The new, nasty rogue strain, called H3N2, is a mutant. Dr. Thomas Frieden, Director of the Centers for Disease Control and Prevention, stated in the New York Times that so far, 91 percent of the approximately 1,200 flu samples tested since flu season started were of the H3N2 subtype of influenza A. Nearly all the rest were influenza B.

Frieden stated that in flu seasons when the H3 subtypes are more common than H1 subtypes, there tend to be more hospitalizations and deaths.

The CDC still recommends that you get the flu shot if you haven’t done so already. Why? It will protect you against the other flu bugs circulating this year: the swine flu, influenza B, and small numbers of the other H1 strains. And, at the very least, it may provide a weak defense against this newest, most virulent mutation, H3N2.

The CDC is urging doctors to quickly prescribe Tamiflu or Relenza—antivirals—without waiting for test results in patients that present with flu symptoms. In addition, it recommends that patients with asthma, diabetes, or lung or heart problems see a doctor without delay at the first sign of a possible flu.

You May Be at Greater Risk

People with weakened immune systems caused by disease or medications (like those of us with rheumatoid disease, psoriatic arthritis, lupus, and other autoimmune diseases, and who may also taking DMARDs that further weaken the immune system), the elderly, and children, and others should also see their doctor right away if they get flu symptoms. All are at greater risk of contracting the flu—and its complications, such as pneumonia, bronchitis, sinus infections or ear infections.

Although the antivirals Tamiflu and Relenza aren’t miracle drugs, the earlier they’re administered in the illness, the better they work. Although all they do, usually, is shorten the duration of the flu by one day, in a vulnerable patient, that 24-hour period could mean the difference between life and death.

So far, five children have died from flu-related illnesses this season.

What To Watch Out For

According to the CDC, people who have the flu often feel some or all of these signs and symptoms:

*Keep in mind that not everyone who has the flu will have a fever.

While this season’s flu vaccine is fairly useless, there are still steps you can take to help protect yourself from catching the flu, no matter which strain it may be:

It’s early in the flu season, but with the flu vaccine as weak as it is, this season may be a bad one. Please take good care of yourself and stay well.

3 thoughts on “Bad News About the Flu”