There are signs. It was dawn when I woke this morning at my usual time, but the sun hadn’t quite topped the crown of the Sierras and my room was still dim, bathed in velvet twilight. Yesterday, as I drove home from an outing to the grocery store, I noticed that the deciduous trees were starting to get that look they get at the tail-end of summer, though it 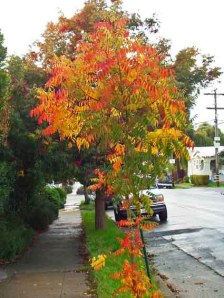 seems a bit early. They look sort of tired, sort of stretched, like a strumpet sneaking back to her own hotel room after a long night of debauche, stiletto heels hanging by their straps from her fingers.

Change. The first autumn leaves are showing on the occasional Chinese pistache. Nothing showy, yet, though those trees are the showboats of the region, originally planted by misplaced, nostalgic easterners desperate for fall color. The change is only a wee dab of rust amidst the vivid green just now, but it’s a certain harbinger of the future. Other signs: Some of the local oaks are dropping acorns; some of the Ponderosa pines already have a scatter of blousy cones at their feet.

And like ol’ Uncle Festus, I can feel the change in my bones. I creak mightily upon rising in the morning. I stump  carefully down the stairs, gripping the handrail tightly, wary of my persnickety hips. The joints feel loose and achy. My hands growl ominously, twinging with glass between the joints as I fill the coffee jug with cold water and spoon fragrant coffee grounds into the filter.

Change. My cousin turns 36 today. He and his wife and two little boys, 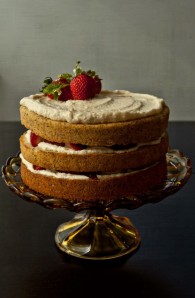 one four years old, the other nine months, will be at my aunt and uncle’s house this afternoon to celebrate. I’m making his birthday cake, a spice-and-poppy-seed concoction with raspberries and mascarpone frosting between the layers. It’s ironic: In my younger years, I never baked, period. This refusal was a source of twisted pride; my mother and my aunt (the same one we’ll be seeing later and who I help during the week) defiantly thwarted female family tradition by refusing to bake pies, cakes and cookies during the holidays. They figured cooking turkeys and the trimmings were quite enough, thankyouverymuch. My sister and I joined the cause with glee.

But after I reached the half-century mark myself, I discovered that baking from scratch can be fun, a sort of hobby and creative, edible art. To my surprise, I liked it. I started with simple bundt cakes and progressed to peach pies. I don’t bake very often—only for holidays and special birthdays—but my Mom, aunt and sister regard me with disgruntled bemusement nonetheless. I feel like a rebel.

I’ve sat here writing and sipping hot coffee, a cat warming each hip, for long enough. It’s time to move. The sun’s well up. I’ve a cake to create and a party to attend, rheuma and bursitis be damned.

Note: Image and poppy seed cake recipe are from the fabulous cooking blog “Not Without Salt.” If you like to cook, take a look.