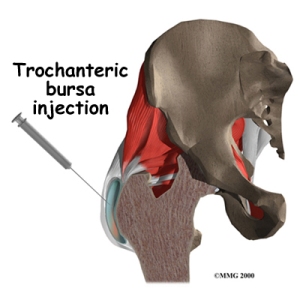 Yesterday at noon my rheumatologist injected steroids into both my hip bursae, one for each side. To my relief, it wasn’t nearly as bad as I feared, though his pushing and pressing on the area beforehand, and the pre-injections of lidocaine hurt like a you-know-what. Ow, ow, ow! But once the anesthesia kicked in, I felt no more than a slight sting and a little pressure as he injected the steroids.

I wish I could say that my hips are much better today, but so far, they’re not. Last night I tossed around as usual, watching the hour hand of my clock make it’s slow circuit through the night. Today, as I sit here writing, they still ache.

But I’m not giving up yet. The doc warned that it could take a few days before the steroids worked, and that it was possible I’d have even more pain before they do. So the jury’s out. I’m hoping for the best.

My rheumatologist said something interesting as he treated me. “’Arthritis’ is a misnomer for this disease,’” he said conversationally. “It’s Greek—‘arthro’ means joint, and ‘itis’ means  inflammation. Rheumatoid arthritis certainly includes joint inflammation, but it’s far more systemic. Your bursae are terribly inflamed because of your rheumatoid arthritis. It affects not only the joints, but the bursae, the tendons and ligaments, and the cartilage.”

I was a little surprised. You’d think by now I’d know just about all there is to know about RA, but I hadn’t really grokked that it affected all those things. Denial is strong even as we try to accept.

He went on. “And you know it also affects other parts of the body, as well. The heart, the vascular system, even the eyes.”

I told him I knew that part.

“For that reason, I think it’s misnamed. RA should really be called ‘rheumatic disease.’ It shouldn’t be confused with other forms of arthritis. They just aren’t the same thing.”

It was nice to hear him say this, and I told him so. I also told him it was nice to have a doctor who didn’t question my pain or try to tell me that I was imagining it. I thanked him for that.

He chuckled. “Look. If you’re in here asking me for steroid injections, your pain is real,” he said. “These are not pleasant. And not only that, but you’ve waited quite a while to ask for them—you first told me about your hip pain 18 months ago.”

“When it first started, it seemed mild,” I said. “I felt sort of embarrassed complaining about it, considering how bad the RA can hurt. This didn’t compare at the time. Now, it hurts a lot more. I broke down.”

“You are incredibly tough,” he said. “I’m often amazed at just how tough my RA patients are. They endure pain that most people can’t even imagine.”

Twenty minutes later I was on my way to have lunch out with my Mom and my aunt. I was smiling. My rheumatologist made me feel good about myself. He taught me something new and gave me confidence in my own perceptions. While the steroid shots may or may not work (I think they will), I feel better today even if my hips don’t, quite yet.