Although the vernal equinox is still a few days off (Sept. 23), I was able to note some subtle changes in the world outside when I took the photo of the cloudy sky this morning, a half-hour past dawn. First, naturally, is the temperature, which is 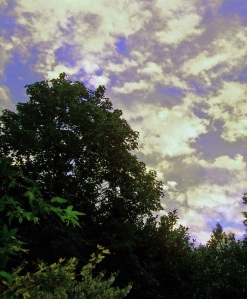 actually much cooler than normal for this time of year. This morning, though, I smelled a hint of frost in the air. Although there was no frost to be seen in my little world, I suspect that 1,000 feet further up the mountain, there was.

Other signs of the impending autumn include a few bright scarlet leaves on the young sour gum tree outside my den window; and at the very top and tips of the Japanese maple outside the kitchen window, the small, delicate, five-fingered green leaves have closed into tiny brown fists. This tree always does this at the far end of summer; I suspect it needs a little more water than its getting on its own, through its deep roots. In a month, all the leaves will be brilliant in varying shades of green, purple, orange, yellow, red, and yes, brown. I love that tree.

The rest of the garden plants have either stopped blooming for the season or, if they continue, look a bit dusty and tired. The exception is the Cape fuschia Mr Wren planted next to the fireplace several years ago. Today it’s covered with tiny red/purple bells, each one with miniscule yellow stamens and pistils deep inside. Lovely.

Other signs of the beginning of the end of the year: many turkey vultures circling high overhead, gathering as they do for their annual migration south. And the occasional honking of Canada geese, sometimes in pairs, sometimes in small flocks, who share the vulture’s intentions. Sunflowers are drooping, their petals starting to wither, and while they’re still green, the persimmons have appeared on the trees. They’ll be just about perfect by mid-November. I’ll make persimmon bread with walnuts and currants to freeze for Christmas.

My house is chilly, but it’s not quite chilly enough to build a fire in the stove. Instead I’m wearing thick sweatpants and a sweatshirt, socks and shoes. I’ve worn nothing but shorts, cool shirts and sandals since June, but wearing this heavier clothing feels good. Cozy. Right.

It occurs to me that these things are all gifts, from the photogenic sky of early morning to the soft, fleecy insides of my sweats against my skin. I wish all of you lovely gifts from the world today and every day. Have a gentle week.