Sorry I haven’t been posting lately. There’s not any one particular reason for my silence; instead, I think there’s a whole mixed bag of reasons my muse has deserted me.

And that, my friends, is why I’m not posting much lately. It’s all too-too. And it will change and things will look up, they always do. Time works. I’m still enjoying the daily gifts: while Finny and Shadow are making me nuts in the housebreaking department, they frequently have me rolling with laughter, too, as they play together. Finny is so little, quick and smart; Shadow so big and galumphing. And, we’ve decided that he’s pretty much a blockhead. Lovable, but dumb as a bag of rocks. The consensus: frequently hilarious.

My gardens are going wild. The wisteria is in its second bloom of the season, the trumpet vines on the arbor to the side garden have giant orange trumpet-shaped blooms, and the hollyhocks are taller than I am and full of blossoms. We have planters full of summertime lettuces and, while those tomatoes never got planted, the local country fruit and vegetable stand has some great Romas at decent prices, so I’m not missing them too much. Same for the zucchini, which I love.

Things will look up. I’ll check in again next week – maybe sooner. Sometimes, forcing myself to break through the writer’s block (even if just to bitch) throws open the floodgates. Maybe it will happen this time.

Until then, I hope this post finds you all enjoying the summertime and feeling well with a minimum of pain – or better, none at all. I’ll continue to comment here and there so you’ll know I’m thinking of you and sending my care your way.

Update: Writing in spite of myself did bring up a small flurry of brain-and-body activity. I remembered to mention Shadow’s new nickname: Cal, which is short for “calamity.” So far, we’re down two ceramic pots in which potted plants resided, victims to Shadow’s sliding turns as he chases Finny from family room to living room at approximately 40 mph. He frequently wipes out. 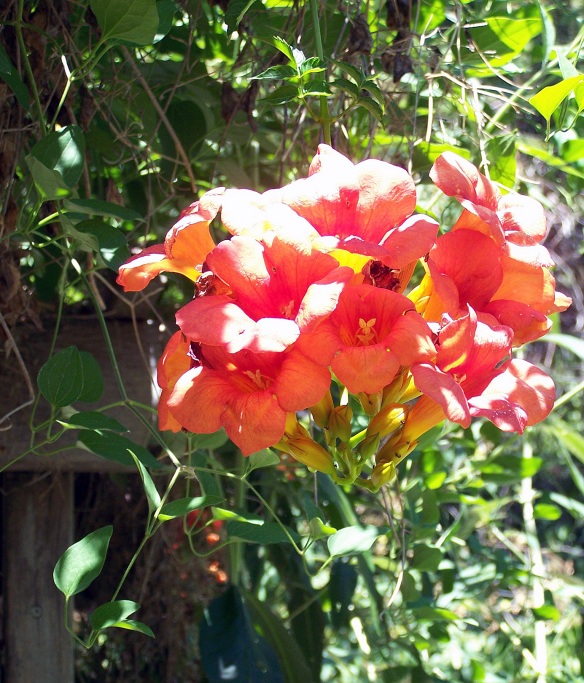 Our trumpet vines are back! We didn't get many blossoms last season. Mr Wren had cut them back severely (they tend to take over) and they hadn't quite recovered when summer rolled around. Another turn of the year, and here they are!

Hollyhocks are old-fashioned, but I love them. We planted them in several different spots around the garden years ago, so now we have them every summer from July through August.

The wisteria, which is quite mature now at more than 14 years old, flowers two or three times each season. I'm not sure what kind of lettuce Mr Wren planted here, but I think it's supper tonight. 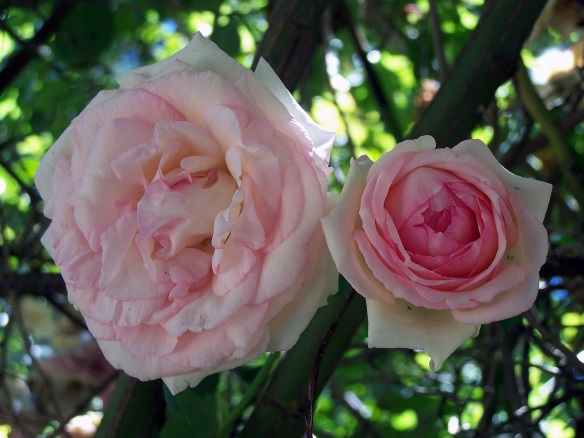 These are old-fashioned climbing damask roses, planted 12 summers ago and now covering a rebar arbor outside my study window.

31 thoughts on “Hoping for open floodgates”