It’s mid-day. I’ve waited as long as I can, but I’m out of patience. I shake two Tramadol tablets into my hand, pop them into my mouth and wash them down with a couple gulps of iced tea.

There, I think. In a little while, I won’t hurt so much. Maybe I’ll feel like … I don’t know … thinking up something cool and crispy and nutritious for supper, doing the chopping and slicing, then putting it all together. Maybe cooking the protein source – chicken or fish, most likely – early, before the afternoon heat shuts me down.

Or maybe I’ll feel more like bustling around and getting some housework done. Sweeping. Dusting. Vacuuming the rugs. A quick swish through the bathrooms.

Or a walk. Maybe I’ll grab Finny and we’ll have a walk ‘round the neighborhood. Look at the neighbor’s gardens. Bring my spare change with me and stop by the little old general store in town for a bar of dark chocolate. I’ll ration it out over the next several days, one glorious square at a time in the evening after supper, with my coffee.

It all depends upon my hands, my hips, and right now, my right knee. They’re all giving me hell, particularly the knee, a country I haven’t heard from in a long 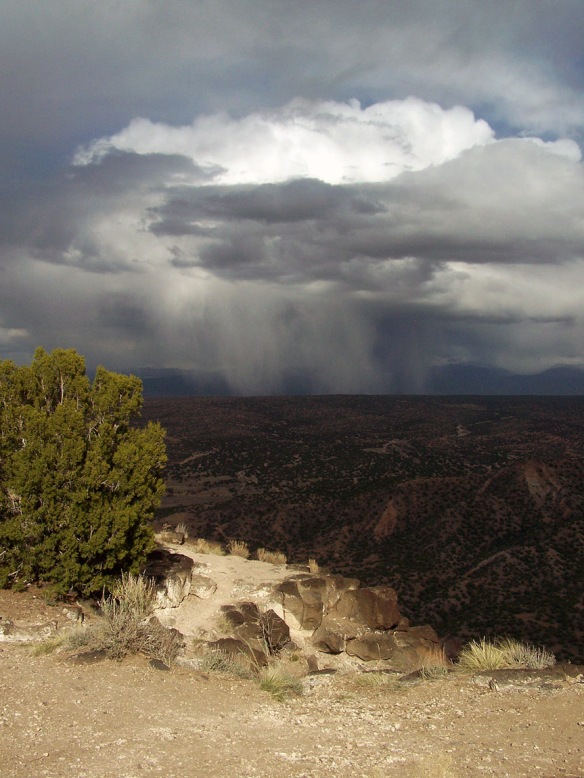 I took this photo in a town near Los Alamos, New Mexico, a couple of years ago when I was there visiting my sister. The storm sky there was much wilder than I've seen here, but it's just as strange ...

time. It could be the weather that’s riling up the rheuma-dragon; it’s going all dark and strange again. It’s been hot – 80s and 90s – for the last week or so. Summer was delayed here in the Sierras, but it finally showed up with a vengeance, sitting it’s sweaty elephant-butt down on us for a nice long stay. But both yesterday and today (and for the rest of the week) we’re getting what I can only describe as storm-drifts. The ominous, pregnant-looking thunder clouds move over, blocking out the sun and raising the humidity, and then move off again a few hours later after doing nothing more than mutter threats. The weatherheads think we’ll get some actual storms this afternoon and evening. I won’t mind rain if it comes, but this dry country could do without the lightening that preceeds the thunder. And frankly, I could do without the barometric pressure waking up my cranky rheuma-dragon and his sidekick, the Biting Orc of Bursitis.

This weather is like snowballs in hell, gang. In my entire life, I’ve never experienced thunderstorms in California during the summer. I know they happen with regularity elsewhere in the nation and the world, but here, summer has always been one long, long, long dry season. Rain in summer? Heh. Maybe it’ll show up again in November.

But here’s the new reality. Even as I write this, the sun outside my window is taking on that odd, muted look, as if some sun-goddess has draped a scarf over her lamp. Yesterday was dark enough that we had to turn lights on in the family room to disperse the gloom. Looks like today will soon be the same.

And it’s still hot. These storms (!) don’t do much to cool things down, now that the earth has soaked up so much heat from the sun. Instead, it just gets muggy – and that’s another phenomenon that’s rare as all get-out everywhere in California except some parts of the coastline. I experienced this hot muggy-ness when I lived in Northern Germany; living right by the sea’s storm-door, summer storms were normal, mainly at the end of the summer. The walls would sweat with moisture, my rheuma would go wild, and when they struck, the storms were nothing short of spectacular. Sometimes they were scary, but they never lasted long.

Just for kicks and giggles, my seasonal grass allergy has turned itself up to high today, so my schnozz is packed, my eyes look like I’ve smoked something illegal and my throat is constantly tickling, making me cough my toes up. Along with all the other meds, I’ve added my emergency Claritin, allergy eye-drops and nose spray.

I’m a real beaut today, gimping around the place with tissues stuck up both nostrils.

But there is good news! Even though I’ve been less-than-totally-mindful about my diet the last week or so, making me reluctant to step on the scale, I discovered this morning that a pair of shorts that were too tight to wear last summer – think cut-off sausage casings – fit me loosely now. That just delights me!

Another gift: Shadow is finally learning that “OUT!” means “Go sit by the kitchen table and watch me while I work in the kitchen instead of standing an inch away from me, where I will trip over you.” Finny, on the other hand, has not learned this yet, but we’re working on it. He has learned that he’s supposed to pee outside when I take him out on his lead, rather than wherever and whenever he feels like it inside. He hasn’t grokked the poop part of the deal yet.

We’re working on it. Shadow has his bathroom manners down. I’m hoping that Finny will continue to look to him, the younger dog by a few months, for continued inspiration.

The upside: both of these new dogs bring me joy every day. Shadow is gentle and so sweet-natured, he reminds me of our old Nessie, a Lab-Doberman mix we lost to old age six or seven years ago. I’ve missed ol’ Ness; she was truly the sweetest dog I’ve ever known. In Shadow, she’s come back to us, and I’m so glad.

Finny McCool continues to reduce me to gales of laughter. He’s like a cartoon character, I swear. He has the most expressive face I’ve ever seen; the photos I’ve posted of him don’t do him justice, because he puts on his glum look whenever I bring the camera out. But believe me, he has a whole repertoire of expressions that his scruffy whiskers and overhanging eyebrow hairs only emphasize. He’s my constant companion 24 hours a day. At bedtime, he jumps on the bed and falls over, limp as a ragdoll, totally ready to go to sleep. It just cracks me up.

Scientists and neurologists say that laughter releases serotonin in the brain. It’s our body’s natural painkiller. No wonder I love to laugh.

So. Freak thunderstorms in the summertime. Heat and humidity. Dog-people as best friends and spontaneous comedians. Rheuma-dragons and bursitis orcs doing their cranky best to make me cranky and low.

That’s my life at the moment, but I’m holding my own, wearing my comfortable “new” shorts and a T-shirt. It may have it’s unpleasant moments, but life’s not half bad, you know? I’ll keep my bitching to a minimum and conjure up something yummy and life-celebrating for supper.

And then Finny and I will drop, limp and boneless, into bed for a good, long sleep.