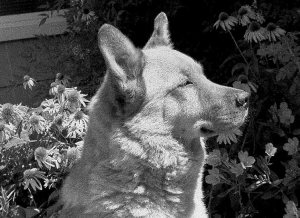 My dear old Logan is gone.

He fought the sedative as hard as he could to the end, that brave old dog, still trying to protect us from Evildoers, but in the end he left this life peacefully and, I hope, without feeling fear or terror. Now we just have to figure out how to get on without his big presence in our lives.

When people we love die, we grieve. Their loss is stunning, life-changing. We can never face the world in quite the same way. A part of us is irrevocably gone, even though they live on in our memories.

For those of us who love animals, particularly the ones with whom we share years of our lives, there’s not a great deal of difference when they die. I didn’t cry over Logan’s bite or the pain of its healing, but today I cried at his loss. I still am. I can hardly imagine getting up tomorrow morning and not find him waiting impatiently for his three biscuits and his breakfast. It’s been our shared morning ritual for many, many years. 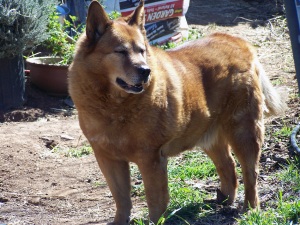 Logan was 91 year old in dog-years. He had a good, long life for a dog; a much longer life, I believe, than he would have had if he’d had people other than us choose him from the litter that day. Of the five puppies born to a Queensland healer dam and a Border collie sire, he was the only red one; all the others were black. He was beautiful then, and as he grew, he became even more beautiful, with gorgeous rufous fur so soft and thick and warm I could lose my fingers to the second knuckle in it. He was, even as a puppy, never the cuddly type of dog. He was afflicted with “fear aggression,” something we discovered when we took him to puppy kindergarten when he was six months old. It was intractable, though we tried hard to socialize him. Some people might have had him “put down” way back then, but we couldn’t do that. He was a member of our family. We’d adopted him for life. And with us, his personality was so loveable, so true and loyal, and he tried so very hard to be the Good Dog we wanted him to be, that “cuddly” and “socialized” didn’t matter. 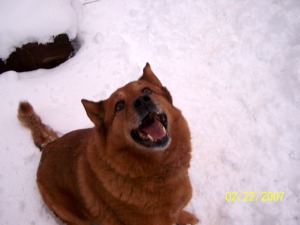 Logan loved to play in the snow, leaping into the air to catch tossed snowballs and chomp them, spraying snow from the sides of his mouth. He’d do it for hours, as long as someone would throw the snowballs for him. He loved to run back and forth along the back-garden fence-line – there’s a worn-to-the-dirt path in the high grass there now that he made all by himself from years and years of determined patrol. For most of his life, he didn’t bark. Instead, he “yodeled,” a sudden, eardrum-piercing, banshee shriek that could raise the hair on the back of your neck. His world was our house and the big back garden.  He guarded it all faithfully. I was never afraid to be home alone with Logan around. He’d have made short work of intruders. 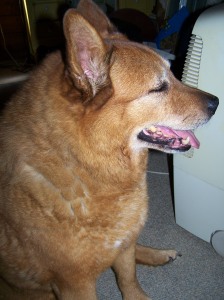 He liked to shake hands, and sit up, roll over and sometimes give very gentle, careful kisses on our noses. Despite his failure at socialization, he never forgot his other puppy kindergarten lessons. He knew how to walk on a leash. He’d sit, lay down and stay on command. He spoke our language even when he didn’t understand.

Logan chased stray cats that came into the yard, but he tolerated PIB and Cary’s two cats when they came to live with us without protest. And even when I brought Finny McCool home not long ago, Logan didn’t protest. He knew which animals were from Out There, and which ones Belonged inside with us and with him.

And now, he’s gone. There’s a Logan-shaped hole in my heart and many years of memories to sift through. I know I’ll learn to live without him; I’ve lost many other beloved pets over the years, and with the loss of each one, my heart has broken. But Logan was special. He tried so hard – right to the last breath he took in this world. He was such a dear friend. And he was a Good, Good Dog.