In the previous post, I wrote in the third update that I really, really wanted a hot 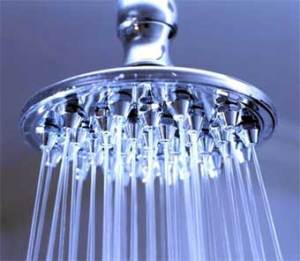 bath, but that I’d have to settle for a hot shower instead (we have no bathtub; that’s another story) while the beets I’d roasted for a yummy salad cooled off enough to peel and cube.

I trudged into the shower. The steaming- hot water, falling from the wide rainfall-shower head, felt simply fabulous on my tuckered out, sore old self. OK, not as good as sinking into a deep bathtub full of hot water would have felt, but it was a definite close second.

I’d bought a jar of Neutrogena Energizing Citrus Body Scrub a few days ago on a whim; it’s made with sesame oil and granules of sugar, so they dissolve and don’t end up floating forever in the ocean or sludge up in the ground water, unlike the plastic sand that’s in a lot of other body scrubs these days. Have you ever heard of anything so completely, ecologically destructive and mindless? Check out Dr. Charles’ post on this subject when you get a minute. You’ll be appalled. Really.

I slathered on the citrus body scrub. It smelled wonderful, like an exploding lemon. And it felt good as I scrubbed my skin with it. Mmm. Made my skin nice and soft, too. Must be the sesame oil, I thought to myself. What a nice idea.

I turned to rinse off and my bare foot sliiiiiid on the oily residue that was now all over the shower’s tile floor, almost turning me into a shower casualty. Fortunately, I caught myself, but I was sure surprised. It was like standing on an oil slick. And not only that, my skin was like an oil slick, too. I couldn’t rinse the stuff off.

So I grabbed the bottle of  Dr. Bronner’s Peppermint Soap. Sure, I’d smell like a lemony peppermint stick by the time I was done, but surely it would be better than the rather ripe, eye-watering, nose-hair-curling fragrance I’d been carrying around since my walk? I set to it. I love Dr. Bronner’s. It’s a wonderfully pure castille hemp soap, it cleanses gently and it never leaves any sort of residue. Plus, I have a feeling it could clean motor oil off garage cement. And the peppermint leaves you feeling all tingly …

Dr. Bronner’s got a little of the sesame oil off my skin, but not all of it. I poured some more of it onto the shower brush I keep on the window ledge for cleaning the tiles and scrubbed the floor so I wouldn’t go arse over teakettle when I got out – and so the next person into the shower also wouldn’t go unexpectedly flying. No go. I’m going to have to hang a sign on the glass shower door that says “Danger! Slick as cat sh*t in here!” and tackle that shower stall with Comet tomorrow. Sigh.

Finally, I was done. I dried off, climbed into clean jammies and slippers, dried my hair and went back to the kitchen, ready to take on the roasted beets.

I hadn’t tried the salad I’d be using them in before. I’d found Tracey’s recipe for it on her blog, “I’m Not Superhuman.” She’s a young health writer who has terrible, painful knees – and she’s a very good cook. Her recipes are always simple, out of the ordinary, healthy and really tasty.

You can find the salad, if you’re interested, at the link above. It involves roasted beets, cut-up sections of pink grapefruit, soft goat cheese, and arugula. The grocery store I went to didn’t have arugula (El Dorado County is one of the few staunch Republican enclaves left in California – and you know how Republicans feel about arugula!) so I got the spring mix (I think they sneak some of that lefty liberal arugula into it).

Tracey’s recipe called for a single beet (the recipe makes enough for two). I was going to get two of them, to feed the four of us. But the store I went to for the ingredients only had tiny beets, each about the size of an undernourished tangerine. I’d never seen such small beets before, but I went ahead and got five. I figured that would be enough (assuming the young’uns in the household would actually eat the salad. Ew, vegetables!).

The idea is to roast the beets until they’re soft enough for a fork to slide into easily, then cool them, peel them and cube them up for the salad. Easy, right?

Wrong. Not tonight. Those peels just didn’t want to come off those little beets. I finally managed it, but not without much cursing and staining my sesame oil-softened fingers and the cutting board a beautiful, deep crimson. Good thing I keep that Dr. Bronner’s handy in the kitchen, too! It de-stained my hands, but the cutting board remains pinkish. It’s sort of pretty.

So. I got the salad made. Drizzled vinegar and oil over it, as the recipe said to.

And then I broiled two nice salmon fillets. I’d gotten them at Trader Joe’s – frozen, wild Alaskan salmon in individual packets – a while back. I prefer fresh salmon when I can get it (and I do love that fish – it’s like eating life), but frozen is good enough in a pinch. Cheaper, too.

Sprinkled the filets lightly with garlic salt, ground some organic citrus seasoning over ‘em and stuck ‘em under the broiler. They were done in no time.

Finally! I could eat dinner! And I was so hungry. All this peregrination for miles has given me quite an appetite. Grizzlies fresh from their winter hibernation have nothing on me.

Well, the salad was as delicious as it sounded. Thanks, Tracey! It was worth waiting all that time for the beets to cool off, and worth the hassle of peeling them. The mix of flavors is exquisite. The only change I’ll make next time (and I will make this again) is to use crumbled feta cheese rather than the soft, mild, creamy goat cheese I bought. I think the sharp, salty tang of the feta will be delicious combined with the sweet and sour of the beets and grapefruit, and the bitter of the spring mix lettuces.

But the salmon … sniff … was simply awful. I can’t remember exactly when I bought it, but either it had been in my freezer way too long or they flash-froze old fish. It didn’t smell bad, coming out of the package, but it sure tasted nasty. Bleh. I couldn’t eat it. Logan (our elderly dog) loved it, though.

To make up for the salmon, I had a big, extra helping of the salad. And to console myself, two sublime squares of dark chocolate for dessert. And now, I’m going to toddle off to bed. Life is good even when it resembles a Three Stooges episode. Have a lovely Sunday, everyone!

Note: By the way, no one has paid me a penny to hawk their products in this post. I just wanted to share.