This is a post I wrote about keeping chickens a couple of years ago. I’m posting it today because I can’t think of anything else to write about. And because I got bored and was reading back, and it got me chuckling. Ahhh memories …

As some of you know if you’ve been reading my blog, Mr. Wren and I keep 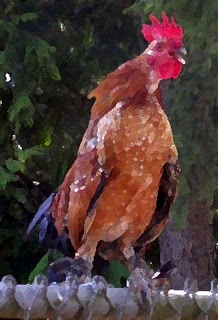 chickens. We have five, and all of them are chubby Rhode Island Red hens. Each of The Girls produces a big, delicious brown egg with a startled cackle once a day during the laying season. They give us far more eggs than we could ever hope to eat by ourselves, so our family, friends and neighbors share in the largess. Smiles abound.

While we don’t have a rooster now, we used to. It wasn’t intentional. Mr. Wren brought six adorable, fuzzy, yellow bantam chicks home one day from the feed store, where he’d gone to buy dog food. Hey, when you live in the country, you don’t buy your dog food at the supermarket, silly. You get it from the feed store like all the other local yokels. It’s fun parkin’ next to all those pickups with the gun racks and watchin’ guys in plaid flannel shirts hawk globs of … whatever … on the dirty plank floor as they hitch up their drawers.

Anyway, Mr. Wren was assured by the bored feed store cashier that the chicks he was buying would all grow up to be hens. He didn’t plan to raise chickens but only to feed and nurture these six little cuties, give them a nice, long, comfy life and in return, enjoy their smallish eggs for breakfast.

They were supposed to be exotic Polish Something-or-Other Chickens, which Mr. Wren chose in a fit of snickering because of the silly-looking top-knots that would grow like mops on their heads when they were mature. Also, they supposedly laid green, pink and yellow pastel-colored eggs. Every day would be like Easter except no messy dye! What a kick in the pants!

Since they were Polish, he gave them Polish-like names. He named one of the little hens, who had a malformed schnozz, “Zbeaksky.”

As time passed we discovered that these chickens weren’t the Polish ones at all, but some of the names stuck.

We also discovered that one of the Not-Polish hens was actually a rooster, after his feathers grew in and he sprouted a magnificent tail and a deep red comb and wattles. With a perfectly straight face, Mr. Wren christened him “Zcocksky.”

It would be nice if that was the end of the differences between the male and female chicken-people, but noooo. This story drags on. Like men, roosters are from Mars. While hens cluck and chatter softly to one another as they scratch around for tasty bugs, roosters crow like maniacs. For those of you who’re barnyard-challenged, understand that this ear-splitting cockadoodle-doooooing does not only take place at dawn, but throughout the daylight hours and even, if the rooster is an insomniac, after dark. Roosters crow, in fact, whenever they damn-well decide to give voice, which is frequently.

Fortunately, living out in the country as we do, having a rooster with an amazingly overdeveloped set of pipes wasn’t the liability you might expect. After a while, we hardly noticed the racket, and if we did, it was a natural racket, at least. We’d just mutter “stupid rooster” and move on. The neighbors never said a word. Really, Zcocksky was much less disturbing than, say, a police helicopter with a spotlight hovering over your neighborhood at 3 a.m., like what happens down in the ‘burbs all the time. I’ll take the crowing rooster, thanks.

And their pipes aren’t the only aspect of roosters that tend to overdevelop. The other things which set them apart from their milder-mannered sisters are their spurs and their tendency toward truly bad manners. Before he grew spurs on his legs, Zcocksky was OK to be around. I could even say his name without bursting into laughter. He’d run up and try to peck my ankles now and then when I was out working in the sunny garden, but he wasn’t very serious and it was pretty funny.

Then he grew spurs and everything changed.

Since none of the chickens except Zcocksky and Zbeaksky were actually bantams, either, but regular-sized hens of a variety of types (the chicken-man in the John Deere cap saw Mr. Wren coming), poor Zcocksky was sorta size-challenged when it came to doing his roosterly duties. But what he couldn’t do in the sack he made up for in sheer, nasty, bad-tempered aggression. He pestered the hens and chased them around, running at them with his head low and his tail up. They’d flutter and cluck and trot off, then go back to ignoring him. So he started taking his irritation out on me.

Whenever I’d go out to the garden, he’d wait in ambush around the corner of the house. As soon as I passed, he’d come tearing out from his hiding place, his chicken feet going thump-thump-thump-thump-thump on the earth behind me. Then there’d be a terrible silence as he launched himself, spurs first, at my calves.

Now, understand that rooster spurs are wicked sharp, like spikes. I’m sure Zcocksky, nursing his small-rooster rage, honed his weapons to a razor’s edge every night while we slept. The idea of having him slash and mangle my legs with those things never much appealed to me, so the second I heard that ominous thumping I’d wheel around, shout and kick him before he could score. Thank goodness for all that kick-ball practice in grade school!

Sometimes my screech and turn was enough to stop his launch in mid-air, but often his momentum was too great and no matter how madly he flapped those silly short wings, he couldn’t abort the attack. In which case he’d encounter my foot, rising rapidly off the ground to meet him.

And then off he’d soar, squawking and flapping, lofted 15 feet down the garden path like a feathery soccer ball. While he was still in the air, I’d grab a rake or a hoe or anything else that could be used as a weapon and crouch, waiting, because as soon as he touched down, Zcocksky would be up again, shaking himself and running at me in his next attack. Sometimes it took three or four Soccer-Ball-Flights before he’d give up for a while to reassess his tactics.

All this time, of course, Mr. Wren was rolling around in the foxtails, laughing his ass off. Zcocksky sometimes took it into his pin-sized head to attempt an attack on him, but Mr. Wren is huge and could have easily drop-kicked him into the next county. Hell, one of his feet was bigger than the entire rooster. So mostly, Zcocksky left him alone, even though all his hens followed Mr. Wren around like rockstar groupies, cooing with excitement.

I’m sure that just steamed that poor rooster, whose ego was already battered. So Zcocksky saved his fury up for me. Once he caught his breath and regathered his few scattered marbles, he’d set up new ambushes. I’d be wandering around the garden, relaxed finally, plucking tomatoes off the vines and relieving the zucchini plants of their baseball-bat sized squashes. As any vegetable gardener can tell you, zucchini squashes grow from neat, tender, edible hand-length tasties to baseball-bat-sized, tough and inedible nearly overnight. If you don’t get them when they’re small, they’re really only good for rooster-bashing.

So imagine: There I am, innocently cutting a huge, prickly zucchini loose when I hear the dreaded thumping behind me that indicates Zcocksky making another kamikaze charge at the back of my knees. I have mere seconds to react. Using a move I learned from Bruce Willis in Die Hard XXIII, I wrench the massive zuke loose, spin and swing – and send that idiot Zcocksky flying backwards through the sky.

There’s a sort of beauty to this.

Now, you animal lovers out there are probably gasping and shaking your heads in disgust at my obvious disregard and hatred for this small chicken. Why, he could have been hurt!

Indeed. So could I have needed stitches in my ankles, so there. We could have kept Zcocksky locked in the pen, but we felt bad confining him and depriving him of all those nice, tasty bugs that were all over the garden. Plus, catching him wasn’t an easy thing to do, as you might imagine. So it was just war. He could have stopped trying to kill me anytime. I’d have easily called a truce. I might even have given him the best tomato worms when I found them, instead of to the closest hen. I might have changed his name!

Instead, I just took to wearing jeans and boots to protect my legs and ankles, even in the hot weather, and carrying a broken broom handle whenever I went to the garden, the better to bat Zcocksky with. It was just safer all around.

Zcocksky finally met his end when he somehow – and for reasons we’ll never know – got into the dog pen while we were at work. When they were out in the garden with us, the dogs never tried to hurt the chickens. They knew the birds were off limits. The psychodog, being a herding-type, would occasionally attempt to herd the hens into a squawking, agitated group and run them back and forth across the garden (we discouraged this, as he tended to get overexcited and the hens exhausted), but Zcocksky never deigned to take part in the herding game. Anyway, I’m pretty sure the last decision he ever made was to attack the psychodog inside his pen.

And that was that. 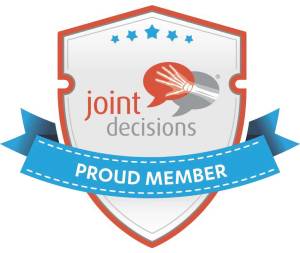