I pulled my car into my driveway a little while ago after a busy morning of chores and errands. As I climbed out and closed the door, I realized that there were things peeping all around me. “Peep!” over here, “peep!” over there, “peep!” high and “peep!” low. The peeps sounded – just slightly – as if they were coming from some other dimension along with the one we all live in. Like an off-kilter echo.

I stood there next to the car, joy filling my mind as I listened. For several long moments, I couldn’t think of anything else — not my twinging fingers, not the chores still ahead, nothing.  Just this beautiful, otherworldly sound that was coming from all directions, like random raindrops.

The “peeps” were the voices of bush tits, some of the tiniest birds on the planet. Really. They’re 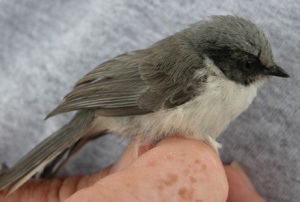 around three inches long, tops. They have to be almost as light as the air itself. They are always moving, little bundles of energy and velocity, never still. They’re native to Northern California and make their long, hanging, sack-like nests high in the branches of foothill live oaks in the hot summertime.

Bush tits are tiny, but they make up for their diminutive size by having these booming (for them) peeping chirps and traveling, always, in a massive mob of featherpuffs. Where other birds move around singly – a single robin, for instance, will land in that tree over there – bush tits move as a cacophonous crowd, an amorphous entity. When they choose a tree in search of an aphid smorgasbord, they permeate it.

So what was happening in my driveway a while ago was that a couple of mobs had descended on the many trees and shrubs in my garden, and they were communicating as only bush tits can as they ate their fill of ants and other tiny bugs. Because bush tits are so small, they’re nearly impossible to see among the leaves and branches. You can see the leaves shivering as they move from twig to twig, but you can’t make out the bird.

This is life. This is magic.

And today, after two nights of mostly uninterrupted sleep, I’m feeling well enough to notice the magic again. As I write, there’s a flock of goldfinches moving through the hedgerow outside the open screen door, chirping and talking to one another. The world swells with life even as it prepares to drift into its long winter sleep.

This morning I felt well – and energetic enough – to go to the gym for a workout, stop by the salon to get my hair trimmed, pop in to buy eggs and cereal at the grocery store, and finally, to zip down the mountain and pick my son-in-law up at physical therapy.

I’m feeling tired right now, but it’s not that flattened out, whipped sort of tired that rheuma usually brings with it for company. My rheumatologist recently prescribed a new anti-inflammatory med and 10 mgs of Elavil for pain and to help me sleep, respectively. I’ve taken them for just the last two days.

And how about that. They worked. I slept through two whole nights.

Now I’m taking a little rest, but when I’m done, I’ll see what else I can accomplish today. Once I’ve refueled, you might have a hard time keeping up with me. I may not be as tiny and quick and magical as a bush tit, but today, at least, I’m living up to my nickname.

One thought on “Everyday magic”