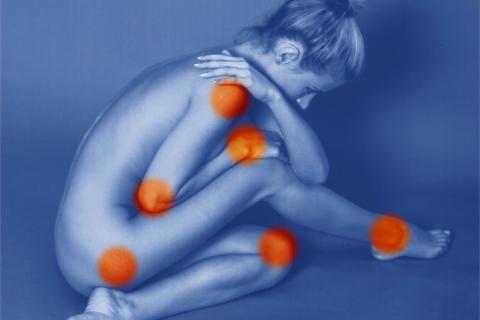 I’m in the reluctant process of re-learning how to accept others’ reaction to my old enemy, rheumatoid arthritis. Honestly, I’d forgotten how uncomfortable people get.

Because I’ve always been a very empathetic person, I understand others’ discomfort when confronted by my disease. Like many people with RA, I get tired of the same old responses, like “you’re too young to have that!” but considering that our culture sees RA as a disease of the elderly, I can’t really blame people for that response. When I’m in the right mood, I just inform them of the truth. When I’m not, I shift the conversation to make it about them instead. Works like a charm.

Yesterday during my morning workout one of the women there asked me how my weekend went. For some reason, I told the truth rather than trotting out the more polite and distant “just fine” response. “Not great,” I said. “I have rheumatoid arthritis. It kept me down this weekend.”

“But you’re too young!” she exclaimed. (Actually, I sort of like this response now that I’m 53. I look too young for RA? Cool!)

“Well, that’s what I said too,” I grinned as I did reps with my legs. “I was diagnosed when I was 31. Actually, it can hit at just about any age.”

Her eyes widened. “Oh my god. Where do you have it? In your hands? My grandmother had it in her hands.”

“My hands, my wrists, my jaw, my shoulders, hips, knees, ankles and feet. Mostly not all at once, thank goodness.”

She complimented me for working out in spite of it, so I told her that some days are better than others, and how I’d been frustrated and aggravated on Friday and Saturday because I hadn’t been able to go because of the pain.

“Does it help to exercise?”

I nodded. “It strengthens the muscles we need to move and helps keep the joints themselves from stiffening up permanently. I’ve never liked to exercise much, but I guess I’m finally mature enough to do it anyway. I’m exercising for my independence. I’m fighting against being disabled by RA.”

“I think that’s a great attitude,” she said. At that point I changed the subject and asked her how her weekend went. She told me, launching into a detailed account of what she and her family had done and where they’d gone. We talked and laughed for a while as we worked out on the machines, a couple of friendly strangers. Finally, she finished her workout, wished me well, and went on her way.

I’m aware that I was lucky in this particular instance, and I’m pleased that one more person in the world understands a little more about RA now, whether she wanted to or not. In the past when I’ve been honest and opened up about rheuma, I’ve seen people’s eyes glaze over before I’ve finished the first sentence. To spare them having to listen (when it’s obvious, at least to me, that they’d rather not), I change the subject. I can’t blame them for not wanting to listen to me whine.

But having to keep my battle with rheuma to myself hurts sometimes. It’s lonely.

Each member of my family reacts a bit differently. My daughter is empathetic, a trait I guess she got from me. And she also has RA, though it’s been mild so far and hasn’t been diagnosed as such yet. She understands the on-again, off-again, migratory nature of the pain, and how intense it can be at times. Her fiancé has had two rotator-cuff surgeries on his shoulder in the last year, so he’s also sympathetic about the pain and occasional disability it causes. My husband, however, is like most other people when it comes to my fight with RA. Most times his eyes glaze over.

I understand his reaction. He retired early several years ago because of disability caused by osteoarthritis and fibromyalgia. He’s frequently in pain, and he takes a truly stunning number of drugs to fight the physical conditions and the other problems they’ve caused, such as depression. The pain meds he takes daily have made him foggy-minded and slow. And he’s basically given up trying to maintain or improve his fitness, strength and mobility. He’s closed in on himself, obsessing over his troubles, and has become a frustrating hypochondriac. And while he’s ready to talk about his own health problems in great detail, he has very little interest in mine.

Absolutely any discomfort I mention, he has as well, only his is far worse. To be perfectly honest, my eyes glaze over, too.

What a shame, really. The result is that we both feel isolated and alone. But you know, he wasn’t always like this. He used to be a loving, caring and compassionate man, full of life and laughter. He was strong, fit and active.

Illness has changed him profoundly. So perhaps it’s time we both worked on this – we need the others’ love and support.

Because I was fortunate enough to have a decade-long remission of the disease, I’d forgotten how hard it is, sometimes, to talk about it. During that first long battle with rheuma I frequently pushed myself too hard, stressing and likely making it even worse as I tried to ignore or deny its effects and keep them to myself. But this time, as the rheuma ramps up again, I’m taking a different approach. I’m being open and honest about how I feel from day to day. I’m accepting my limitations. It’s still difficult, but I’m learning. Each day brings new revelations.

WoooHooooooo! Now that’s the kind of news I like.