I’ve wanted to create my own artwork for RheumaBlog’s banner for a long time, now, but I just couldn’t seem to translate the vision in my mind to an image on paper.

So I used Wassily Kandinsky’s version of St. George and the Dragon for the banner instead. I adore this painting. I love its rawness, its blazing primitiveness, its perfect flow and constant movement. I love the artist’s magnificent use of contrasting and complimentary colors; combined, they pop the image right off the canvas and bring it alive. I love the dapple-gray warhorse and most especially I love the wry, knowing grin on the dragon’s face. Did Kandinsky put it there on purpose? I think he did. Everyone fights dragons of many kinds during the course of their lives, but only a very few actually slay them.

The only part of the painting I’ve never much cared for was the sacrificial maiden, set off to the right of the action as if she was an afterthought. In fact, she’s looking away from St. George and the dragon, a dreamy look on her moony face. Silly, overdressed twit.

You may have noticed that while I used Kandinsky’s wonderful art for my RheumaBlog banner, I usually cropped that brainless-looking girl right out. See, the brave knight attacking the dragon is me. And the dragon himself is my rheumatoid disease. In my ongoing battle with him, there’s simply no place for a helpless woman.

Still, as compelling as Kandinsky’s artwork is, I’ve long wished I could create some art of my own to use as RheumaBlog’s banner. And now, finally, I’ve done it! I had to crop it tightly to fit WordPress’s parameters, but I think it still works. The smirking rheuma-dragon is there–and so am I: small, chubby, but fierce and determined.

Here it is, uncropped: 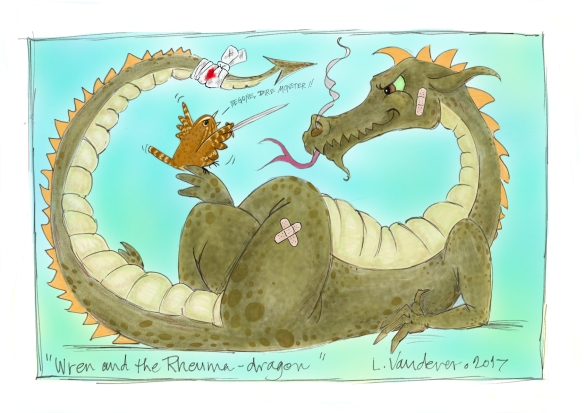 I’d really like to know what you think of it. I realize it’s much less dramatic and more humorous than Kandinsky’s work (and jeez, he was an actual Famous Artist!), but I’ve used humor and whimsy as my armor against this disease from the start. Finally, my own art works best!

I’ve changed the page’s colors to match up with the new banner. I realize that some of you may have difficulty reading the type on a colored background. Please let me know if the pale yellow is a problem and I’ll be glad to change it back to white. I’m just playing around with the design elements right now, tweaking here and there for looks and readability. I want to hear from you so I can make sure it’s accessible for everyone.

I created this artwork with my imagination, my new Surface Pro tablet computer and stylus, and the wonderful illustration and manga program Clip Studio Paint.

And now, it’s late. The rheuma-dragon, that monster, is gnawing that tearing at my fingers, hands, and wrists. So I’m bugging out for the night, achy and weary, my dragon still un-slayed. But you know what? I’m also really happy.

4 thoughts on “Being Creative”