The weeks following my return from Philadelphia were a chaotic combination of hurrying, scurrying, and worrying. With the sale on Mom’s condo finally closed, we needed to find a new home. So we looked and looked–way down the hill in Sacramento.

She had definite ideas about the kind of place she wanted—it had to be safe, have a washer and dryer, be in a good neighborhood, be close to stores, shopping, doctors and friends, and allow pets. And it had to fit her budget, which was not flexible. It left me with a real conundrum.

Mom decided a two-bedroom apartment would be just right. One bedroom would be hers, she said, and the other would serve as the guest room, just as it had at her old place. I would use the guest room unless we actually had a guest—in which case I’d 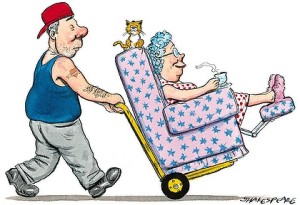 just move into her room with her during their visit.

But apartments, we discovered, were both expensive and tiny, depending on where they were located and how old they were. The newer, more modern places were downright miniscule—but still very pricey. And although we’d spent much of the summer downsizing Mom’s lifetime collection of possessions, when it came right down to it, she still had a way too much.

And then, there was this: I’ve lived in Mom’s guest room, now, since October 2010. Her overall health is better now than it was then—she was really sick—but she still has frequent down days. She has heart problems, mild COPD, and stomach problems, and she’s become progressively more and more forgetful. She has trouble with her balance–even on good days–and tires very quickly. She wants to drive, but shouldn’t, so I’ve taken on the role of chauffeur/companion whenever she wants to go out.

Mom simply can’t live alone anymore, but she also can’t afford an assisted living facility. She’s too mobile and independent for a nursing home—and she’s not quite sick or enfeebled enough to need one, anyway. My sister and I don’t want her in one of those places unless—or until—there’s just no other choice. So, because I was unemployed, had time on my hands, and lived nearest to Mom—my sister lives in New Mexico—I stepped up to the plate, figuring at the time that it would be temporary. That was four years ago this month. I left everything of my own behind at my little house in the mountains.

Anyway, with this major move, what I really wanted—and don’t laugh, now—was just a room of my own. A room I could decorate the way I like, with my own furniture from home. A room I could be at home in, instead of always feeling like a long-term guest. I wanted a quiet, private space where I could write and work—a room with a desk and a door. And I wanted a room I could put a drawing table in, so I could do my artwork without having to put it all away every day to keep Mom’s still dynamic inner-neatnik happy. (Of course, doing art doesn’t work like that. It needs to be out and handy, ready to pick up whenever there’s a free moment or the creative urge hits. Mom. Doesn’t. Get. It. She never did.)

But having a room of my own meant finding a place with a third bedroom—and it somehow had to fit into Mom’s budget. She wasn’t happy. She kept saying no.

So we looked and looked. Finally, we found an older apartment with three decent-sized bedrooms. The complex was safe, but it wasn’t in the really nice, upper-class neighborhood Mom wanted. Instead, it’s not far from the local community college and caters to students and middle class working folks. It’s in the middle of the suburbs, surrounded by all the shopping and conveniences anyone could ever need or want, and there’s even a large hospital (and ER) just a couple of miles away. They allow pets. The apartment has a washer-dryer combo 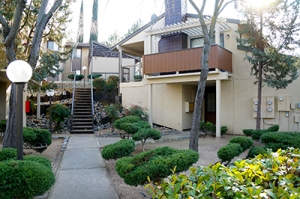 inside. It has a pool, a sauna, a hot-tub, and a fitness room. (I like all that. A lot.) And it’s in a neat, clean, nicely landscaped, well-maintained, gated and patrolled, attractive apartment complex.

But it’s still far smaller than Mom envisioned—any apartment would be—and with the third bedroom, it simply didn’t fit her budget. She dug her heels in. An extra bedroom, she said, was just an extravagance. We didn’t need it.

Well, she didn’t, but I did. So I told her I’d rent the room from her, making up the difference in cost so her budget would be intact. And I’ll admit it—I pushed. I really wanted my room, but the truth was, we were also running out of time. We had to be out of the condo within two weeks.

The week before we moved we were still trying to get rid of several large pieces of furniture, none of which would fit in the apartment. In the end, the woman who bought Mom’s house bought them all from us—it worked out just great, and Mom got a nice little stash of cash. Selling it was hard on her, though. Each piece of furniture—the giant china cabinet, the tall, open shelves, the beautiful dining room table and chairs—was laden with memories of Mom’s life with my Dad. And she had to give them up.

And then, the Friday afternoon before Labor Day—just four days before Moving Day—Mom got her feet tangled as she got up from the couch to answer the door, fell, and broke the humerus bone in her arm near the shoulder. She’s had osteoporosis for years, so no big surprise. In fact, one of the reasons we moved—along with financial considerations—was to get her into a ground-floor apartment or condo so she wouldn’t need to climb up and down stairs anymore. They ones at the old place were broken bones just waiting to happen.

Well, the broken arm really threw a wrench into Mom’s works. Because of where the break was, they couldn’t put a cast on it, but she has to wear a sling to keep the arm immobilized so it can heal. It was (and still is) painful, of course, which meant she needed painkillers. (It’s healing nicely, now, but still hurts if she forgets and tries to use it too much.) Mom’s balance was already dicey, but with one arm stuck to her side, useless, it got even worse. Now add narcotics, stress, consternation, frustration, and exhaustion, and you have a pretty good idea how the move went.

Thank the gods and all the angels that my sister and I were able to convince her to hire professionals to pack and move her. She fought us on that, not wanting to spend the money, but I used the RA card while my sister reminded her frequently that she was becoming too frail to do it all herself like she used to.

So we’re here, finally. Things are mostly put away—but there’s still a mountain of boxes and a couple of old recliners. The boxes are full of fragile breakables from Mom’s gigantic china cabinet; close to 60 years of Christmas stuff; and a lifetime of small things that she just couldn’t bring herself to part with. And the mountain of boxes is in—you guessed it!—my room.

At least it is until we can get a storage space rented here at the apartment complex. Fortunately they do have them, so it’s just a matter of… well… moving all those boxes to one and ponying up the monthly fee. Mom is digging her heels in again on that. Sigh.

So, at the moment, I’m still in the guest room. But that’s temporary, right?

In other news, my RA has gotten progressively worse. I saw my rheumatologist a couple of weekends ago, and after some discussion, we decided I’d start Humira. 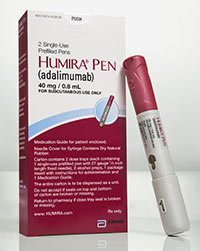 The self-injecting pens arrived a couple of days ago, and today—ta-da!—I did my first injection. Did it all by myself! Fortunately, Terry, who writes the blog “RA Adventure Rider”  just published a funny post about his own recent injection of Humira. After years of using the stuff, he’d forgotten to ice the injection site before injecting—and suffered a brief, raging bonfire in his leg. He wrote about it with humor as a gentle warning to us newbies, and man, am I glad he did. As he suggested, I let the pen come to room temperature and used an ice-pack on the injection site before taking a deep breath and pressing the button. And hey! Done! Almost no pain. Thanks, Terry. Really.

I hope Humira will play Stomp the Dragon with my rheuma. I could really, really use a break.