Yesterday was a really rough day. I was hurting all over, but the RA was hitting my hands and wrists the hardest. Along with that, the chronic trochenteric bursitis I’ve had for several years now showed up again, making my hips feel like I had spikes in them.
So, I wore my compression gloves all day long. I counted down the hours between painkiller doses and wished, fervently, that they’d work better. I sat with ice-packs jammed against each hip and toddled around like an old lady.

It was no fun, but I’ve had worse flares. For instance, I was able to do most of what I needed to do in spite of the pain yesterday. I even managed to make a fresh salad for lunch by limiting the ingredients to Romaine lettuce, tomatoes and cucumbers because those veggies don’t require much effort to chop. Still, it was a long, miserable day. The RA and bursitis pain was constant and nagging. Ignoring it was a pipe dream. And pain like that simply wears me down.

What brought this nasty flare on? Hmm. The weather was clear and hot. I kept checking the barometric pressure, convinved that it must be rising or falling, prodding my rheuma-dragon and making him restless and irritable. Making him bite. But the barometer was dead-steady. That wasn’t it.

(An aside: I used to just accept that there was no rhyme or reason for flares. They just came and went, random as clouds. Since those early days I’ve learned that there may be triggers for RA flares, such as barometric pressure changes or fatigue, so I tend to look to those before I just give up and blame the pain on fate alone.)

So, the barometer was out. What else could have caused me to flare? Well, I took my uncle to the VA medical center to see his doctor and have some tests done the day before yesterday. I wore myself out. Could that be it?
Maybe, but with the exception of hefting unc’s wheelchair into and out of my car’s trunk a couple of times, most of the day was spent wheeling him from clinic to clinic, waiting through appointments, and driving there and back again. And then back home. It wasn’t exactly strenuous, though it did end up being a full, 8-hour day. Now that I look at it all written down like this, I’m not really surprised that I was pretty much whupped by the time I got home.
I went to bed about an hour early and fell asleep the moment I laid down. But I woke several times during the night. And when dawn arrived, my hands were stiff and throbbing, and the bursitis was shooting darts through both hips.

So, maybe I can blame Uncle’s Doctor Day for yesterday’s flare. But I can’t just quit helping him to avoid rousing the dragon. Beyond that fact that I love my uncle, helping him means that I help my sweet aunt (whom I love even more), too. She also has tronchanteric bursitis, she’s 79 years old, and caring for him has just about run her ragged. I can’t leave her without help.

Today, the bursitis pain is there but mild, thank goodness. And my hands are somewhat better. I’m glad the concentrated rest helped, but I’m not totally convinced that getting so tired the other day was the sole reason this flare happened.

There are other culprits.

Number One: I stopped being mindful about my nutrition and calories some time back. Like I’ve done time and time before, I was pleased with what I weighed and how I looked and felt, so I started cheating. I hate to admit this, because it’s just an excuse, but my mom is one of those lucky people who can eat anything she wants and never gain weight. She loves sweets and potato chips and fast food and keeps them on hand all the time. I got tired of always denying myself those goodies, and I got lazy, too. It’s a lot easier to eat like she does than make myself special meals (she doesn’t like what I eat when I’m being good to myself). It’s just plain hard to resist the constant temptation those cookies and bags of candy in the cupboard present me with, not to mention the ease of KFC and Carl’s Jr.

The result? I’ve once again regained the weight I worked so hard to lose—plus a little more for good measure. And while I don’t know what my blood-sugar levels are at the moment, I’m sure they’re high. I imagine the lipids and cholesterol levels don’t look very good, either. My blood pressure has been up a bit for awhile now, though my doc hasn’t suggested medication for it yet. And I know I’m once again looking squarely at the dreaded Metabolic Syndrome—excess fat around the mid-section, a proven cause of heart trouble (which RA can cause, as well)—complete with pre-diabetes, at least. Type 2 is waving coyly from the wings.
Crud. I’m frustrated—no, angry—with myself for being such a weakling, such a slacker. Sure, I know I’m not alone. Plenty of Americans are obese, their health compromised by their penchant for French fries and Keebler’s cookies, McMuffins and candy bars instead of nutritious breakfasts and lunches, and chips and microwave popcorn after dinner from Pizza Hut, munched in front of the TV at night. Still, being one of the crowd isn’t much to be proud of, is it.
So, today marks my first day back on the Real Food wagon. I know that the poor diet I’ve allowed myself to eat, and the excess poundage it packed back onto my smallish, five-foot-four-inch frame, has only made the rheuma-dragon stronger, meaner and harder to fight off. Yesterday’s flare was just a taste of what lies ahead unless I take action. Now.

Getting it all back under control is fairly simple (though much harder to do than it is to say): just cut out the processed foods; the junk and fast foods; the flour-and-simple-carbohydrate-based white foods; and of course, nix anything with sugar or high-fructose corn syrup in it. Eat whole grains only, but limit even those to as little as possible. Eat lots of green veggies—the darker green the better—along with veggies in most of the other colors, too. Severely limit dairy foods. Eat fruit, 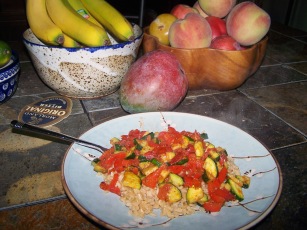 A good meal for RA, and easy to make.

but watch the sugar content. Since I like meat and don’t really want to give it up completely, I’ll limit it to fish and chicken breasts, which I like best anyway. And I think I’ll try chef Mark Bittman’s suggestion and only eat meat after 5 p.m. and choose one day a week to go completely meatless. It can only help.

The Number Two Culprit: I stopped even trying to exercise. Along with that, I spend a big chunk of each day planted squarely on my broadening behind. So I’ve got to get my body moving again. I’ll start out with a short walk early each morning, adding more time and distance as my body strengthens. I’ll do some gentle stretching and resistance exercise each day as well, including the ones I learned at physical therapy for the bursitis. Maybe it will help that, at least. And if I’m careful, it shouldn’t aggravate the RA much, if any. In fact, I keep reading that exercise helps RA, even if it’s just to strengthen the muscles that support the joints. That hasn’t really been my experience, but I tend to give up exercising easily if I start to flare. This time I’ll squash my inner-wimp and try to stick with it.
Diet and exercise really do have a beneficial affect on rheumatoid arthritis (and its co-morbidities, like bursitis). I’m only human—I’m good at denial and prefer the easy path to the hard. But I’d also like to live a long and productive life with a minimal amount of illness and disability. I know how. It’s time to get busy again.

NOTE: Andrew, who writes the blog Living With RA has written a three-part series of posts about RA and Metabolic Syndrome. They’re excellent: meticulously researched and written so that they’re easily understandable for the non-medical-type person, which most of us are. He’s also a very good writer, so do take a look at http://livingwithra.wordpress.com/2013/06/27/metabolic-syndrome-and-ra-increased-cardiovascular-and-diabetes-risks/

11 thoughts on “Back on the wagon”