I’m stuck, it seems, on the RA roller coaster. (Do check out RA Guy’s breathtaking video animation about that particular analogy. It’s quite fitting, except, unlike RA, the ride finally ends …) 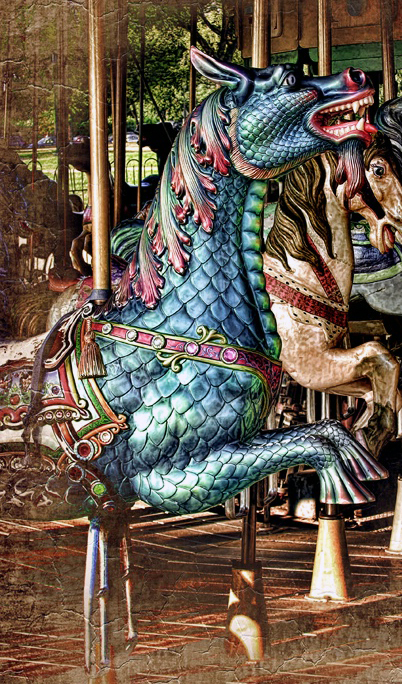 Personally, I’ve never been fond of roller coasters. Too scary. To much harrowing anticipation, too many heart-stopping falls and jarring, jerking turns. Instead, I always preferred the carousel with its sweet, cheery music and brightly colored galloping horses and exotic wild animals. The carousel was perfect for a child with an overactive imagination. It never bothered me that my steed was only going in circles.  I was always sadly disappointed when the ride ended. If I’d had my way, I’d have stayed on that carousel all day long, lost in my imagination while the rest of my family got the daylights (and the carnival food) scared and shaken out of them on the roller coaster and bumper cars.

I was an odd child.

I was forced to ride the RA roller coaster for the first 10 years or so following my diagnosis. It was miserable. Jarring. Scary as hell. And then suddenly, without warning, I was allowed off the ride.  I went into complete remission—for about six years. It was nice, being back in the non-carny world. I was able to get on with things at a time in my life—late 30s, early-to-mid 40s—when careers typically take off. I was a professional journalist with a job I loved. In my off-work time, I enjoyed hiking, backpacking and camping in the wilds with my family. Things were going very well. I began to forget the roller coaster years.

Of course, my RA woke up and became active again. I was back at the carnival, but instead of being forced into a seat on the roller coaster, I was allowed to ride the RA carousel.

This analogy works for me when it comes to how my RA has been over the last seven years. (I am always a bit stunned when I realize how many years have passed since I was in remission!) My less-than-trusty steed is the rheuma-dragon, slick, shining, blood-red and oozing black.  He slithers around in a wide, continuous circle, never really reaching a goal (either remission or cure). Along the circuit he rises and falls. For the first couple of years, the ups and downs were gentle, sometimes almost imperceptible apart from the sharp-toothed, nibbling fear that the dragon carousel might transform into a roller coaster. The ominous symptoms of the disease were back, but they were mild, easy to deal with and sometimes, even easy to ignore. So I did, as often as I could.

Over time, though, the dragon’s ups got steeper and scarier, and the downs more like free-falling. The carousel started speeding. I started thinking about getting off the ride while I could (found a rheumatologist and began drug therapy).

Today the carousel whirls and the dragon leaps and falls, leaps and falls, with only a few, unreliable hours of level motion in between. The ride isn’t quite a roller coaster , but I can feel it wanting to be. My hands and feet are bound to my rheuma-dragon’s saddle as he leaps along in great, fast, blurring circles, and the sweet, tinkling music has become something strange, cacophonous and shrill …

Sigh. Silly, overdramatic Wren. She’s gliding gently into old age, but she still has that long-ago child’s overactive—no, hyperactive—imagination. If there’s a consolation it’s that she rarely get bored.

One day, perhaps, medical science will allow me to climb off my dragon and walk away from the evil RA carnival, once and for all. I no longer think it will happen soon, but I do think a cure for autoimmune rheumatoid arthritis will be found in my lifetime. And if it doesn’t, I believe it will happen for all you younger folks out there.

May 7th is the first birthday of the International Autoimmune Arthritis Movement, and May 20th the first ever World Autoimmune Arthritis Day. From IAAM’s website: “IAAM introduced the term “Autoimmune Arthritis” to the community in 2009 … [to create] awareness about these misunderstood diseases by differentiating them from the other 100+ arthritis conditions.  The term originated in medical journals but was never defined.  Therefore, IAAM worked with a Rheumatology Board to determine an official definition and to select the main diseases that would fall into this category. In 2012, “Autoimmune Arthritis” has developed into the politically correct phrase to describe a specific group of illnesses.  By differentiating arthritis instead of lumping all types under one umbrella, awareness is finally happening.”

“World Autoimmune Arthritis Day (WAAD) was established in 2012 by IAAM and will be celebrated each year on May 20th,” states the WAAD website. “Because the term “arthritis” covers over 100+ conditions that involve joint pain, Autoimmune Arthritis Diseases are a small group of like illnesses that share both symptoms and treatment methods.  By creating a separate day for this group, awareness about these specific, systemic, and sometime deadly diseases can finally be brought to a global level.”

According to IAAM, they have “established World Autoimmune Arthritis Day (WAAD)  … on May 20th, online and during all time zones, [thereby]making it a 47-hour online event.  This Virtual Convention will unite patients, supporters and nonprofits from around the globe, inviting them to participate in both live and on-demand presentations, scheduled live chat sessions, surveys, live Call to Action posts and access to an online library of downloadable resources that can help them and their supporters in managing their diseases. Thus far, WAAD is registered on 16 health calendars internationally and has already received nonprofit support from over a dozen organizations, including the American College of Rheumatology, the Spondylitis Association of America, Arthritis New Zealand, the International Still’s Disease Foundation and Lupus UK.

“As the official Host of this historic event, IAAM invites YOU to be a part of it too. Best of all?  It’s FREE to register!”

You can do so by clicking this link.

Education about RA and other autoimmune diseases is vital and needed by those who have the disease and—just as importantly—by their caregivers, families and the world at large. IAAM has created an excellent way to learn about them and, perhaps in time, help to find better treatments and—dare I say it?—a cure.