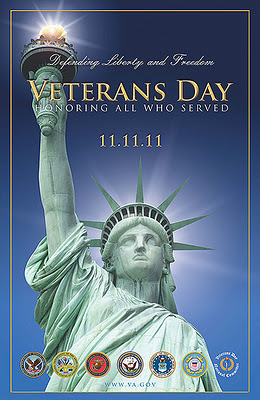 It represents a lot more than a sale at TJMaxx. Mr. Wren and I are both veterans; he served in the U.S. Army, I in the U.S. Air Force. We were fortunate that during the years we served, there were no active “hot” wars – only the long, ominous Cold War that began its end in 1989 with the fall of the Berlin Wall and finished, finally, with the collapse of the Soviet Union in 1991.

I’m proud of my military service. But to my mind, the real veterans are the Americans who’ve served in wartime, the ones who literally put their lives on the line to protect their country. I know many of them and met and worked with many more. Some of them were drafted, others were volunteers, like the men and women serving our country today in Afghanistan and Iraq, South Korea and Europe. Some saw battle, but many served in the “rear,” supporting the fighting troops. They were vital, each and every one of them.

One of the things I loved about the military was its diversity. People from all walks of life form the Army, the Air Force, the Marines, the Navy, the National Guard and the Coast Guard. Black and white, Asian, Native American, Hispanic – the military is a compressed American melting pot of people working and living closely together, all over the world.

If you’re a bigot, you’ll find yourself at a loss on an Army post. Nowhere is it more crystal clear that people are people, no matter their gender, the color of their skin, their economic status or where they’re from. They have an important job to do, a vital common cause, and they do it together. Their hearts all look the same.

For this white woman who grew up in a mostly white, California suburb – my high school class had one, single black student – the Air Force was an eye-opener. One of my favorite memories comes from when I was in training in Texas as an intelligence analyst. The tech sergeant in charge of a work detail I was assigned to one day asked me a question – and his deep drawl was so lush I couldn’t understand what he was saying. He repeated himself, twice, and I still didn’t get it. Finally, he said, “Airman, where you from?” His voice was as slow as cool honey.

“The laaaand of the frooooots an’ the nuts,” he grinned, as if that explained everything. “I’m from Miss’ssippee,” he said, relenting. “I’ll help y’out. Read mah lips …” It was the first time I’d ever heard that phrase used – and it was long before Bush 41 used it in regards to taxes. Because the sergeant was being very patient and speaking even more slowly than usual, I understood him this time, and before he was done giving me his instructions – where to go dig rocks out of a corner plot where grass seed would be planted — we were both laughing. He hadn’t insulted me, only teased, and it served to close the wide gap between our disparate cultures. I later learned that this man had served in Vietnam as a draftee, and when he’d come home, he decided to stay in the Air Force and make it a career.

Over the years I became very good at sussing out accents, drawls and colloquialisms. After I was discharged, and later went to Germany to work for the U.S. Army as a civilian, everyone sounded pretty much the same to me. My country, and the world, had become a much smaller place – a village.

I’m blathering on, here, so I’ll get to my point. Today is the one day of the year that America pauses to thank its veterans, our friends and neighbors who took an oath to protect our country in times of war and serve as guardians during times of peace. While there are as many reasons they signed up as there are colors, genders and cultures within the armed forces, all of them share a deep love for America – so deep, they were prepared to die for it. Many of them have seen war first hand, seen friends and comrades maimed or killed and have lived under dreadfully difficult conditions so foreign to American civilian life they might have been on another planet.

Many are still serving, all over the world. And there are thousands of soldiers, sailors, airmen and marines, right now, who are serving their country as volunteers – our future veterans.

All of them deserve our deep respect and our thanks.