I’ve always thought of myself as a pessimistic optimist. That is, while acknowledging that 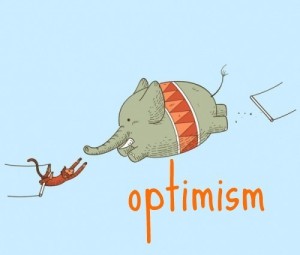 things more often go wrong than right, I still stubbornly hope for the best. When it doesn’t happen, I lift my chin and resolutely search out the bright side. I always manage to find one.

As a result, I’ve had a tough time figuring out what to think of my visit to my rheumatologist this last Saturday morning. In a nutshell, what he said was this: “Your RA has become more active. There’s little we can do, but we’ll try. Ditto the bursitis.”

Now, I don’t want to give you the wrong impression. My doctor, who I like very much, was kind and sympathetic. He was, as always, informative. Compassionate. And he was honest, which I appreciate. Still, I couldn’t help but feel like I’d had the wind kicked out of me, even though I knew before I walked into his clinic that my rheuma dragon has fully awakened and is both irritated and ravenous (my elevated sedimentation rate and other indicative blood tests bear that out). Because of the more active RA, the bursitis in my hips is also more painful. I knew that about all my rheumatologist could do was increase the dosage of or change my medications. I knew he didn’t have a magic wand.

Didn’t keep me from hoping he had a secret stash of fairy dust in his pockets, though.

Well, he didn’t have any of that, either. Instead, he increased the dosage of the sulfasalazine I take. He prescribed a couple more steroid tapers for the bursitis, since those had a limited therapeutic effect last time. Since my pain has been elevated along with the inflammation, I mentioned that my old friends tramadol and hydrocodone haven’t been working as well as I’d like, hoping that Dr. McA would have a magic bullet for that, too. Well, no. Instead, he asked if they lessened my pain by at least 30 percent. I told him they did. Just. He smiled and told me gently that a 30 percent improvement is the most they expect from these painkilling medications. “Nothing will relieve all the pain,” he said.

Right. I knew that. I’ve always known that. But those meds used to relieve quite a lot more than 30 percent; in fact, they used to effectively smooth the sharp, jagged edge of the pain down, making it very much easier to bear. But lately they merely blunt it a little.

He renewed my prescriptions for both analgesics, adding enough refills to last until my next appointment. And then we were done. Dr. McA wished me well and moved on to his next patient.

I know I’ve been very lucky, what with my years-long remission and, since it reactivated, with the way my RA has been kept under “control.” While I’ve had some pain since the dragon started stirring again way back in 2005, it hasn’t been too bad. In fact, it’s been fairly easy to be cheerful and, yes, optimistic about it, particularly since there are now so many different, hopeful treatment options for the disease. Many of them didn’t exist when I was first diagnosed in the late 1980s. The medications I was given back then—mostly NSAIDs—did nothing. I suffered awful, frequently disabling pain. The only things that helped were the various narcotic pain relievers, those soft, opiate angels with names like Codeine, Vicodin and Percodan. Knowing that there are now more viable options for effective treatment has been a huge relief.

So today I’m having more and more frequent flares, sessions that feel increasingly as painful and drawn out as those I used to have pre-remission. And now I’m told by my rheumatologist that, basically, I’m just going to have to tough ‘em out, just as I did in the past.

It all leaves me a little breathless. I know I’m just going to have to readjust my thinking and start looking for my silver lining in different places. I’m going to have to resign myself to enduring heavy pain again, and more disability. And I’m going to have to accept that while there are many new medications for RA, they aren’t necessarily magic potions. They’re just chances for relief, and temporary ones at that.

At this moment, the only bright side I can see is that I’m not dead yet. But I’m still an optimistic pessimist. Given a little more time to mull the situation over, I’m sure I’ll come up with something better.

11 thoughts on “Looking for the silver lining”