When it was time for lunch today, rather than making a tuna sandwich on white bread (we’re all out of whole grain bread at the moment), I decided to eat something better for me, instead. Granted, tuna isn’t a bad choice — it’s full of protein and other good things, like Omega 3s, so you’re getting a lot of goodness in an efficient food — but this tuna was mixed with mayonnaise into tuna salad, adding a lot of extra fat calories. Eating it on white bread just seemed awfully self-defeating to me, and I’ve allowed myself too many “bad” foods lately. The scale and the fit of my clothes have begun to remind me of why I just can’t eat hamburgers and French fries. Denial only lasts until, as I pull my pants on, I discover I have to “oof” to button them.

So. Healthy food today. I’d made some brown basmati rice ahead yesterday, cooked in organic vegetable broth. (I find it easier to stick to eating nutritiously if I make sure I have things like cooked brown rice handy). Now it was a matter of what to have with it.

I looked in the fridge. Mmm. There were zucchinis and a red bell pepper in the crisper, and Roma tomatoes in the bowl on the cupboard. Why not just stir-fry those veggies in a little olive oil and have them over the rice?

And that’s what I did. While the veggies were cooking, I added a sprinkle of garlic salt and a generous shake of Chinese Five Spice. The whole thing took about 10 minutes.

Method: Heat olive oil in a skillet over medium heat. When it’s hot, add all the chopped veggies and cook, stirring often and adding seasonings, to the desired degree of doneness (I love veggies hot but not cooked until they’re soggy). While they’re cooking, heat 1/2 cup of the brown basmati rice you made ahead yesterday on a plate in  the microwave; you could also dump the rice into the skillet with the veggies near the end of their cook-time and heat it that way.

Put cooked veggies over the rice, grab a fork, and eat. Yummmmmm! 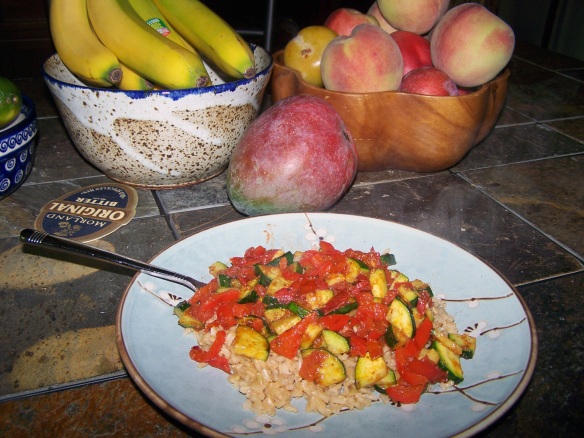