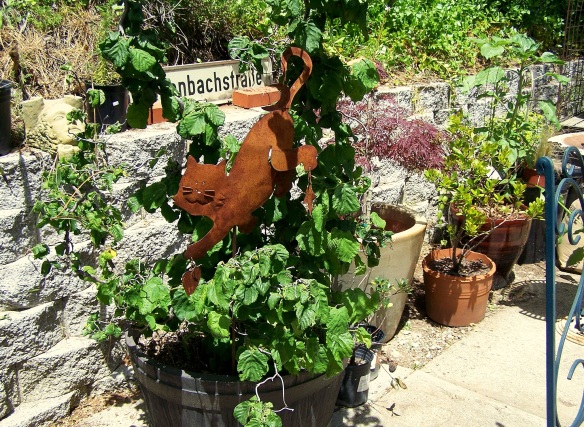 This is a Harry Lauder's Walking Stick, one of my favorite shrub/trees. It's about 15 years old now, which just amazes me.

Finally, summer seems to have arrived.

I’ve spent about 12 hours over the last two days clipping, pulling wild blackberry canes and sweet peas, dandelions and scotch thistles, raking, pitch-forking the yard waste into the bin, and sweeping. I’ve planted some bright flowers here and there and weeded out and cleaned up the pots holding my favorites on the patio.

I’ve discovered that our old umbrella, which somehow never got put away last fall,

Wild blackberries and sweet peas (shown on the walk after pulling), get super-thick, tangled and thorny in the hedgerow as summer progresses. The berries, which ripen in the fall, usually get snapped up by the birds before I think of picking them. So this summer, I'm ahead of the game by pulling the ones I could reach. Not to worry. They'll be back.

didn’t weather the winter well. It’s ribs are snapped, the fabric torn, and the pulls rotted away. Oh well — I’ve been thinking about getting one of those sail-cloth sun shades anyway. Now I have an excuse …

I ’bout wore myself out. But it’s beautiful out there — warm but not scorching. Sunscreen, a hat, and copious amounts of water later, I’m done with this part of the garden clean up.

Next up? The other side of the house — another long cement patio — and the masses of grassy weeds up at the street on either side of the driveway. Once they’re gone, I’m planting things that need little water to survive, but will still look a lot nicer than the weeds. And then — a thorough sweeping of the entire driveway again, last done in the late fall.

This is good, hard work, enjoyable work. And since it’s pretty much too late in the season now for a vegetable garden, I’m not going to worry about it. Maybe I’ll plant a pot with tomatoes on the patio and give it a go, but the raised beds are for next year. I’ll just have to lean on Mr Wren to build the danged things so they’ll be ready next spring, should the sun come out.

On the physical side of things, I’m feeling pretty decent. Tired, of course, from the physical work, but I like that. Both hands are a bit achey and stiff with rheuma (as usual), and my right hand (the one Logan bit) is swollen from fingertips to wrist

This is the "after" photo. I trimmed back the maple branches and the wild loops and vines of clematis hanging down off the garden arch. Much easier to walk along the path, now ...

and bright red, but there’s no pain there. I’m stuck again, right now, at 168 on the scale, but I have a feeling that the garden work I’ve been doing and will continue doing will start knocking that down pretty soon, as long as I keep eating mindfully. Exercise alone isn’t enough for weight-loss, but in combination with healthy nutrition, lots of water and plenty of sleep at night, it tends to jump start the metabolism.

The Sierra Bushmen (handymen, weedwhackers and haulers galore) will be here sometime next week to put up a new length of chain link fencing along the side of the yard that needs it, and they’ll be fixing the short stretch of fence along the top of the yard that was blown down during one of the winter storms. Next order of business: a new gate. That one’s a Mr Wren job, but I’m hoping to get a fire lit under him so it can be done about the same time as the fence-work.

It can’t happen too soon. We have another new member of the family: Shadow, a 15-month-old, sweet-tempered, dumb-as-a-post black Lab. Who, I might add, can’t be allowed to run loose in the yard yet because of the bad fences. Once he discovered that he has to keep Shadow leashed and inside all the time (like I do Finny), and walk him out to do his business several times a day, Mr Wren called the Bushmen. Nothing like living the aggravation to motivate action, eh?

Shadow is scheduled at the vet’s for neutering on Thursday. Once he’s home again and healed up, Mr Wren and I are signing up for dog obedience classes with Shadow and Finny both. We love dogs, but love them even better when they’re well-trained. It should be an interesting six weeks.

Hope this finds everyone feeling well and enjoying life.