Today was Work in the Garden Day. 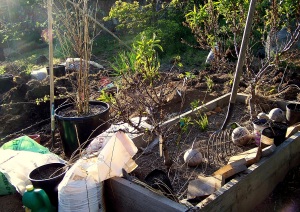 The mounds of soil to the left of the existing raised beds has to be moved to make room for the new ones. Once they're built, all that soil will go in them and we can start planting this season's vegetable garden. Whew!

OK, it was more like Work Up the Gumption to Work in the Garden Day. Breezy and 72 degrees. Sunny. I spent the morning washing, drying and hanging up clothes, since this was a chore that needed to be done, too, but I kept thinking about those rotting bales of straw from last year’s garden and how I needed to get out there and break them apart and start raking them over the weed-whacked Back 40.

This was because every time I look out the family room windows, I see the lumber Mr Wren bought and treated just prior to the last big Late Season Storm, sitting there, waiting to be turned into raised garden beds. Mr Wren was out, volunteering at the local Home and Garden Show with the Master Gardeners, something he’s done for the last three days. I knew he’d be pretty tired when he got home, but with yet another Late Season Storm scheduled for Tuesday and Wednesday this week, if we’re going to get those beds done before mid-May, Stuff  Has To Happen.

So I put on my gardening jeans, my sleeveless T-shirt (might be nice to get my Vitamin D from the sun instead of a bottle of pills for a change, thinks I), slathered on SPF 50 sunblock (doesn’t that make the whole sun/Vit. D thing moot?), found my gardening gloves, stuck my gardening hat on my head, grabbed Finny and out we went.

I had two hours until Cary was to get off work, and she was making noises about wanting to go perambulating with me again. I figured I could get quite a bit done in two hours if I hustled and still have enough energy to walk two miles.

Heheheh. No… but I did get all those straw bales broken up. Turns out that after a long autumn, and a very wet winter and spring, they’re mostly rotted inside, some of them nearly into lovely black compost.

So much for actually raking the straw over the weeds. Most of it is un-rakeable. But a lot of it can be mixed into the soil to continue the process of breaking down into more rich soil, so now it’s a matter of getting it all out of the way so that the beds can actually be built. And, as the weeds come back, I figure weed-whack them down again.

Those weeds are my bane. They’re mostly foxtails, and once they put up their namesakes-like seedheads, not only do they reproduce themselves times several hundred per weed, the foxtails also get easily caught in Logan’s thick fur, his ears, his pads and maybe even his nose. The nose disaster hasn’t actually happened yet, but it has to our neighbor’s Irish Wolfhound. Cost her a fortune to get that foxtail removed from his gigantic snout, and I can only imagine the awful discomfort it must have caused him.

Why not spray the Back 40 with Round-Up, you ask? That stuff kills weeds dead! And so it does, but Mr Wren is Earth-friendly to a fault. His normally gentle lips curl into a scary snarl when such options are aired; he despises commercial, chemical herbicides and insecticides with an ardor that is truly something to see. So the solution has always been to simply weed-whack two or three times each spring, summer and fall, a hot, sticky, itchy, hellacious, two-day job. He did it. I provided band-aids, iced beverages and encouragement.

He can’t do it anymore, though. Age, osteoarthritis and degenerative disk disease prevent the kind of Supergardener escapades he was once capable of. And so I, with my own limitations from rheumatoid arthritis, ponder the task. 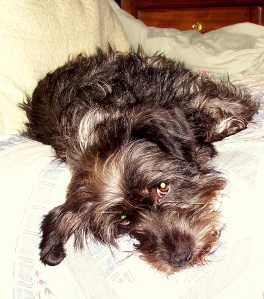 I think Finny was just as happy to rest today, too.

I worked for my two hours in the sun this afternoon. It felt great. The hours flew by, and by the time they were up, I was draggin’ tail again and my hands were throbbing ominously. I came inside, Finny in tow, and called Cary to see if she still wanted to walk. I was prepared to do it, really I was, but she said she’d changed her mind. Work had been frustrating and difficult (she does the production on the Monday edition of the local newspaper alone on Sundays) and while she’d met the deadline, she didn’t have much oomph left in her. I was just as glad. She might have had to carry me for the last mile.

I took another hot shower and washed the dirt and sweat away, then got started on dinner, using some spring onions and leeks that survived from last season (against all expectations) in a nice spaghetti sauce. The pasta was spinach and cheese tortillini. It wasn’t the wholegrain type (bad Wren!), but I figured I’d eat of them lightly and load up on the leftover beet-and-grapefruit-and-spring mix lettuce salad from yesterday.

And that’s what I did. Now Mr Wren is out in the garden, clearing space for the two raised beds. Each will be 16 feet long and five wide, and he’s making them 24 inches high so neither of us will have to bend much to tend them. He’s tired from his volunteer work earlier in the day, so I don’t expect him to get too far tonight. But that’s all right. We can get a lot done tomorrow (I’m ever optimistic), let the storm blow through again on Tuesday and Wednesday, and get back to garden-building on Thursday after a good rest. I’ll walk with Finny again tomorrow, too. And soon, we’ll start planting this season’s summer garden.

I can almost taste those sun-warmed Roma tomatoes now.

5 thoughts on “Sunday in the garden”