Blarg. My grungy tum continues. I’ve tried ginger tea, soda crackers, and plain toast. A long Sunday nap (so decadent – naps always make me feel guilty) with Finny and elder cat PIB (they’ve reached a sort of truce; PIB gets the pillows at my head, McCool burrows down beneath the quilts and uses my legs as a chin rest). But so far, no relief from the nausea.

Next on the list of possible remedies: spiced chai herbal tea with cinnamon, cardamom, ginger and anise. Sigh. I hope this grumbly stomach goes away soon.

At the same time, my right hand and wrist are being particularly ugly. I figured it was the barometer causing the pain. It had to be either rising or falling, since we’re heading into a rather drastic weather change — a weak storm is headed in off the Pacific tonight and then at least two more, much bigger, stronger, colder storms are predicted for tomorrow evening through Wednesday. The weatherheads are saying there will be lots of snow in the high mountains above us, and there’s a very good chance we’ll get some as well before they all blow through. The dogwood buds on our trees are still tightly furled, though, so these storms won’t be the legendary  “snow on the dogwoods” ones that herald winter’s end in the Sierras.

To my surprise, though, it’s not the barometer causing my hand to ache. A check of the weather on my Yahoo page says the barometer is holding steady at 30.18 inches. Hmmm. Who knows why my right hand is being so gnarly today, then. It’s just my old nemesis rheuma, doing what it does so well for no good reason.

Brighter news: while walking Finny McCool today in the thin sunshine I noted plenty of springy things happening. The crepe myrtles and forsythia are blooming wildly, as are all the fruit trees – apples, nectarines, pears – out in the back garden. I also noticed we have some nice looking leeks and a few lone stalks of asparagus out there. Probably should pick and use the leeks, at least. I love leek and potato soup. The roses are putting out new leaves by the bunches, some of the daffodils are 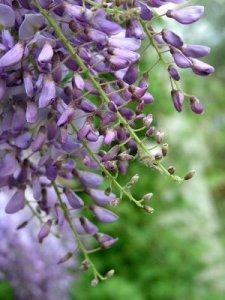 blooming, and the wisteria is full of long, spear-like buds.

We usually lose the first wisteria bloom each year to random hailstorms, which never fail to occur the day after the flowers open up in all their blue, lavender and white glory on leafless whips. It always makes me a little sad to see those battered blooms afterwards, but wisteria is tough and takes such setbacks in stride. It simply blooms again two or three times through late spring and summer.

Last night, I heard a great horned owl hooting from somewhere in the fir trees. That’s one of my most favorite sounds in the world. I’m pleased to hear it, too, because it means the owl pair is back, preparing to nest and raise a few owlets.

There were chores today: Matt helped me fill the wood ring next to the wood stove with almond-wood stove-lengths this afternoon in anticipation of the colder temperatures to come, and I cleaned the stove out and emptied the ashcan. We’ll be cozy, but it felt a little odd, really. It’s been so warmish here – most days alternating between sun and clouds, temperatures in the mid-60s – that we’ve hardly used the stove during the last two weeks. Instead of building a fire in the stove, we’ve simply worn an extra layer of clothes in the mornings and evenings, because by mid-day, it’s far too warm to have the stove radiating heat. We’ve even had most of the windows open to the fresh air, which I absolutely love. The breeze moves the windchimes and makes music for us. But with these new storms on the way, the nights will back down into the low 30s. Well, we’re ready.

Like this post, it’s been a slow, meandering sort of Sunday here at the Wren’s Nest. I wish you all a lovely Easter week.

“In the spring I have counted one hundred and thirty-six different kinds of weather inside of four and twenty hours.”

6 thoughts on “Meandering through Sunday”