“RA is a disease of encroachment.” 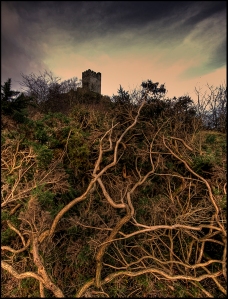 So commented KimH, the writer of the blog RA Sucks, about my last post. Her words struck me; they’re undeniably true for a lot of people who have rheumatoid arthritis.

As an artist (I’ve been drawing since I was a toddler) and a writer, I have a “visual” imagination. I’ve discovered over the years that I learn most easily when I’m shown how something works, rather than reading instructions or descriptions.  When I was learning to be a radar weapons technician in the Air Force 30 years ago, I had a terrible time understanding the geometry involved in sending a fighter aircraft after an enemy aircraft at the correct angle to achieve a “lock on” – the angle necessary to successfully fire missiles and shoot the target down. Frustrated, my instructor finally went into his office and brought out two model jet fighters. He handed me one of them and said, “OK. You’re the target. I’m the interceptor. Now, if I fly in at this azimuth…” and he proceeded to show me, with those plastic models, what I’d been unable to understand by looking at numbers and dry words in a manual.

I learned. In fact, I learned so well I became an instructor myself six months later.

I mentioned this to explain just why KimH’s words so caught my attention. When I read the word  “encroachment,” I immediately visualize a tangle of thorny, tough, menacing dark weeds closing in around a cottage from all sides, a la the brambles that overtook and enclosed Sleeping Beauty’s castle after she pricked her finger on the spindle. The dictionary definition of “encroachment” (meaning that something advances beyond ‘proper’ limits) doesn’t exactly match up with what I “see,” but that doesn’t really matter. My understanding is still accurate and my visualization is, to me, chilling.

While RA may strike some people suddenly and with vicious strength, for many of us, it truly is a disease of encroachment. It creeps up over months and years, gradually changing our lives and the way we live them. Instead of being awake and aware of it (like a gardener with a pair of trusty clippers he can use to cut brambles back and thereby keep them under control) we don’t notice how RA is affecting us until we realize, suddenly, that we can no longer open that jar without help, or that we’re always avoiding outings with friends because we know we can’t be on our aching feet that long. We compensate almost without thinking of it.

Another example of this from my own life is from about three years after my daughter was born. I had a large ganglion cyst in my right wrist. While I was still in the Air Force, the doctors there aspirated it three separate times, hoping to get rid of it for me, but it came back each time, a hard, round bump the size of a marble right at the bend of my wrist on the back of my hand. It was rarely painful, but it did occasionally interfere with my grip. My hand would sometimes spring open on its own accord when I tried to pick something up.

I’d been out of the Air Force for a couple of years, when one day I reached down to pick up my daughter – and realized that I wasn’t using that hand to grasp her, but instead, used my forearm to sort of scoop her into my arms. I’d grown so used to not trusting that hand that I didn’t think about it anymore, and I couldn’t remember the last time I’d used my right hand to lift her up. Since the cyst was becoming more painful, more often, and was starting to bother me when I typed, I went to my family doctor about it. He referred me to an orthopedic surgeon, who tested the strength of my grip in that hand. It was about 30 percent of what it should be. Two weeks later, he removed the ganglion cyst surgically. My wrist healed and the cyst, thankfully, was gone for good. I had the full use of my hand back.

RA is pernicious and sneaky. Sometimes, it creeps up so slowly, so gradually that we don’t really notice it – at least, not until it blocks out the sun and we’re trapped. KimH wrote, “Having RA is like growing old. For example, when your sight starts to go and you need reading glasses, you’ll initially deal with trying to focus on the written word by holding books and Kindles at arm’s length. Then you’ll finally relent and get reading glasses.” 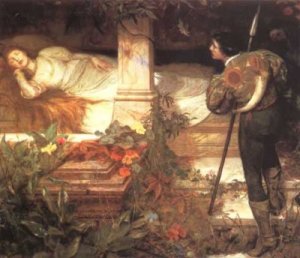 To her, the way RA “encroaches” is probably the scariest part of having the disease. By the time we grab our virtual clippers – strong medications, lifestyle changes, mobility aids, supplements – the damage is already done. The thorny weeds of RA have started to undermine and rot the castle walls. Our only choice is to try to keep it from doing more damage, and in the meantime do our best to cope with the increasing pain and disability.

I guess this post is really just more on the “quitting RA” theme. It just occurred to me how nice it would be if a Handsome Prince could ride up on his white charger and hack through the brambles to wake me from my RA trance.

I think I’ve been reading too many fantasies lately.